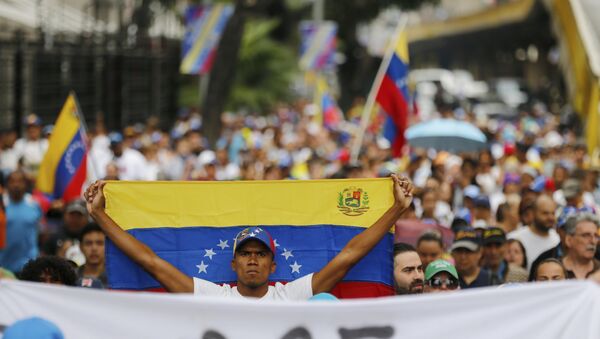 © AP Photo / Fernando Llano
Subscribe
US National Security Advisor John Bolton has said that President Trump made it clear that all options are on the table when it comes to the crisis in Venezuela. On Monday, the US imposed sanctions on Venezuela's state-run oil giant PDVSA as part of its efforts to oust President Nicolas Maduro in favour of self-proclaimed interim leader Juan Guaido.

Sputnik has discussed the statement with Stephen Morris, Professor of Political Science and International Relations at Middle Tennessee State University, who signed an open letter calling on the Trump administration to "cease interfering in Venezuela's internal politics".

Sputnik: What do you make of this comment that "every option is on the table" in regards to Venezuela? And do you foresee a situation where the US would actually take military action in Venezuela?

US to Boost Pressure on Venezuela, Cuba to Curb Russia, China in Region – Report
Stephen Morris: Both are consistent with US history in dealing with Latin America. The United States I don't think has ever said that options are not on the table. They always say all options are on the table, which obviously, particularly, in Latin America includes military intervention. So in my mind, it's typical US behaviour, behaviour that's kind of crisis-driven; but in many ways where the United States is involved in helping to create the crisis in which they, in turn, go in and seek to resolve the crisis.

Sputnik: So that's a very interesting thought you said that where the US was involved in creating the crisis. Do you feel the US has played a role in the development of the Venezuelan crisis?

Stephen Morris: Oh absolutely. There's plenty of blame placed on the Maduro government. There's no doubt about that. There's no doubt it's a semi-authoritarian government, at best. But the United States has had sanctions on Venezuela since 2015, going back to the Obama administration, and they've tightened those sanctions more recently.

Sputnik: What interest, financial, political otherwise does the US have in Venezuela, other than that 500,000 barrels of oil they're purchasing currently every day?

Sputnik: John Bolton was spotted holding up a notebook with the words 5,000 troops to Colombia. What do you make of that? And what should be made of that?

'Coup Is Against Venezuelan Constitution' – Self-Proclaimed Pres. Guaido's Envoy
Stephen Morris: Well, I think that is also a sign that everything is on the table including sending 5,000 troops to Colombia. I don't think that was a mistake. I think that was just a way of sending a threat to the Venezuelan government that the United States is prepared to send troops to Colombia, and then Colombia would be cooperative in the effort to overthrow the Maduro regime.

Sputnik: Bolton did say that Washington is interested in the political outcomes in Venezuela because of its oil reserves. What do you make of the character of that comment and also there have been meetings ready between high-ranking US officials and Juan Guaido, what do you make of that situation?

Stephen Morris: Well, it's a rather bold and honest statement to say that the issue is oil. The United States will certainly and has to a certain extent tried to frame this as an issue of democracy and the suffering of the Venezuelan people, and treating it as they tend to do. They will magnify the crisis and kind of what we call the devil theory of politics, give the impression that Maduro is a dictator that stands in the way of democracy and prosperity for all of Venezuela, saying things are less complicated than they actually are.

Russia Debunks Rumours of Plane Sent to Venezuela to Grab the Country’s Gold
So it's typical of US behaviour to simplify matters and to see them in crisis terms and then to see themselves, the United States, as the only power in the world capable of fixing things; and they don't really have a great record of doing that in the countries where they've intervened. So I think all of that kind of plays together in building this up as a crisis. It's leading to confrontation; it's very difficult to get beyond that.

The views expressed in this article are solely those of Stephen Morris and do not necessarily reflect the official position of Sputnik.

000000
Popular comments
The U.S. has been grooming Guaido since 2005. See www.sott.net/article/406034-The-Making-of-Juan-Guaido-How-The-US-Regime-Change-Laboratory-Created-Ve . This is a very revealing article.