© REUTERS / CARLOS EDUARDO RAMIREZ
Subscribe
The US and its European allies are continuing to step up pressure against the Maduro government and provide support to opposition leader Juan Guaido. Speaking to Sputnik, Erdogan Gunduzpolat, the chair of the Latin America-Turkey Business Development Association, shed light on Western countries' role in the Venezuelan crisis.

The US and EU adhere to democratic principles only when it fits their interests, said Erdogan Gunduzpolat, the chair of the Latin America-Turkey Business Development Association, drawing parallels between Washington and Brussels' reactions towards the ongoing Venezuelan crisis and the 2016 coup attempt in Turkey.

"The West is trying to overthrow the legitimately elected Venezuelan president by violating all legal norms", said Gunduzpolat. "If one looks at how the West's relations with the countries of the Middle East, Africa and Latin America have historically evolved, then one sees that Europe's reputation with regard to compliance with international law and human rights is far from being flawless".

Venezuela Crisis: US May Have Been Behind This For a Long Time - Prof
Therefore, the Western countries' attempts to pin the blame on Venezuela — a sovereign and independent state — for violation of human rights look unconvincing, the businessman pointed out.

"The West cares exclusively about its own interests and protects human rights only when it yields profit", he opined, expressing confidence that "Western forces will not succeed in Venezuela".

On 23 January, Juan Guaido, the head of the disempowered National Assembly of Venezuela, declared himself the interim president of Venezuela. The move was praised by the US, which immediately recognised the self-proclaimed leader.

"Today, I have officially recognised the president of the Venezuelan National Assembly, Juan Guaido, as the Interim President of Venezuela", Trump tweeted Wednesday.

"I am 40 years in politics", the Turkish president said. "And I have always respected the elections. If there is no respect for the will of the people, then it is not democracy, but authoritarianism. Maduro was elected president. That's why I, as a person who believes in democracy, was shocked by Trump's decision".

'Military Intervention Seems More Likely Than Ever' - Author on Venezuela
Commenting on the Russia-Turkey consensus on the situation in Venezuela, Gunduzpolat highlighted that while Moscow has maintained close ties with the Latin American country for decades, Ankara has just started to develop cooperation with the continent.

According to the businessman, "Russia and Turkey are on the same page regarding the need to build up cooperation with Latin America".

"We must develop common models of interaction in both economic and strategic areas, laying the same strong foundations for cooperation in the [South American] region as was done in the Middle East", he opined.

Referring to the Venezuelan political crisis, Gunduzpolat drew parallels between the ongoing unrest in the Latin American country and the attempted July 2016 coup d'etat in Turkey.

The news about the Turkish unrest emerged in the evening of 15 July 2016 and prompted mixed signals from the US and European states: Washington and EU members seemingly hesitated to express unequivocal support for President Erdogan while the situation was hanging in the balance. 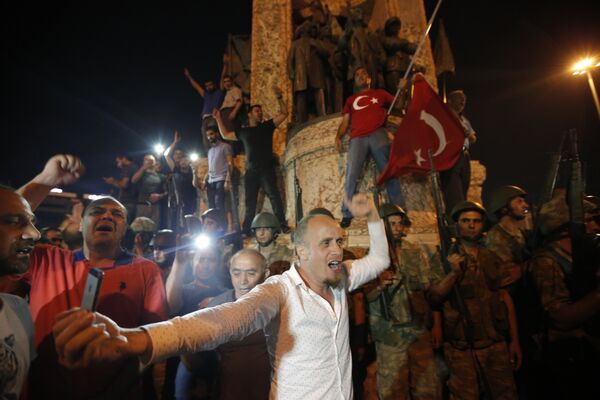 Only on 16 July, the European Commission issued a statement saying that "the EU fully supports the democratically elected government, the institutions of the country and the rule of law".

Earlier, on 15 July, EU High Representative for Foreign Affairs Federica Mogherini merely urged "for restraint and respect for democratic institutions", stressing that Brussels is closely keeping an eye on what was going on in Turkey.

In constant contact with EU Delegation in Ankara & Brussels from Mongolia.Call for restraint and respect for democratic institutions #Turkey

​Similarly, commenting on the ongoing coup, then UK Foreign Secretary Boris Johnson tweeted on late 15 July that he was "very concerned", adding that the British Embassy on the ground was "monitoring the situation".

Very concerned by events unfolding in #Turkey. Our Embassy is monitoring the situation closely. Brits should follow FCO website for advice

​It took two more days for the UK to officially condemn the putschists: "We firmly condemn the attempted coup by certain members of the Turkish Armed Forces," British Prime Minister Theresa May stated.

US Secretary of State John Kerry was the first among the Obama administration to comment on the situation in early hours of 16 July: "I hope there will be stability and peace and continuity within Turkey, but I have nothing to add with respect to what has transpired at this moment", he said. However, the second statement by the White House more specifically stated that "all parties in Turkey should support the democratically elected government".

History Repeating? Analyst on How 'Libyan Scenario' is Unfolding in Venezuela
The apparent ambiguity of Western leaders sparked vocal criticism from Recep Tayyip Erdogan, especially after US and EU leaders warned him against cracking down against the putschists. "Instead of thanking this nation that quashed the coup in the name of democracy, on the contrary, you are taking sides with the coup plotters", the Turkish president said on 29 July, condemning Washington's unwillingness to extradite cleric Fethullah Gulen, the alleged mastermind behind the coup attempt.

However, when it comes to the Venezuelan turmoil, the US and its European allies reacted more assertively, rejecting the legitimacy of democratically elected President Maduro from the start of the turmoil.

Spoke today with Venezuelan Interim President Juan Guaido to congratulate him on his historic assumption of the presidency and reinforced strong United States support for Venezuela’s fight to regain its democracy….

….Large protests all across Venezuela today against Maduro. The fight for freedom has begun!

​After Washington threw its weight behind Guaido, Britain, Germany, France and Spain stated on 26 January that they would recognise the self-proclaimed interim president unless snap elections were announced in Venezuela within eight days.

Bank of England Denial to Return Gold to Venezuela 'Warning for Others' - Expert
The same day, Bloomberg broke that the Bank of England had blocked the Maduro government from withdrawing $1.2 billion worth of gold.

Two days later, the Trump administration stepped up the pressure by announcing sanctions against the country's state-owned energy giant PDVSA.

"The path to sanctions relief for PDVSA is through the expeditious transfer of control to the interim president or a subsequent democratically elected government who is committed to taking concrete and meaningful actions to combat corruption", Treasury Secretary Steven Mnuchin stated on Monday.

As of yet, the United States, Canada, Israel, Argentina, Brazil, Chile, Colombia, Costa Rica, Guatemala, Honduras, Panama, Paraguay and Peru have recognised Guaido as the interim president of Venezuela.