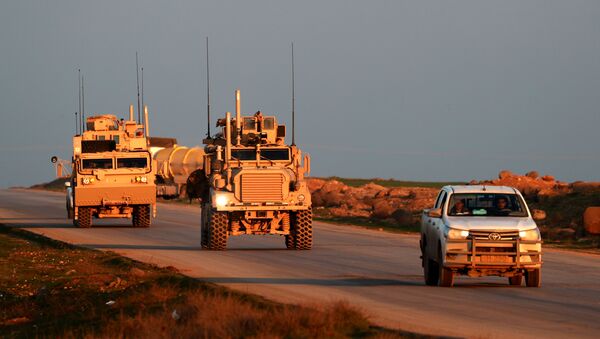 Turkish President Recep Tayyip Erdogan announced that a counterterrorist military operation east of the Euphrates would be conducted soon after the completion of the US pull-out from Syria. However, Washington has voiced concern that Ankara could attack its Kurdish allies in the region, suggesting the creation of a buffer zone in northern Syria.

The US is holding talks with its allies the UK, France, and Australia, to help create a 32km wide buffer zone between Turkish and Kurdish forces in Syria, as Washington is planning to withdraw from the country, The Wall Street Journal reported, citing anonymous sources in the White House.

According to another source, an unnamed European diplomat, the US is holding talks on the matter, but pointed out that none of the states have so far agreed to assume such a role.

The newspaper noted that Washington wants to minimize the possible drawbacks of its withdrawal from the Arab Republic, while fulfilling US President Donald Trump's order. The measure should also prevent a potential resurgence of Daesh* in wake of the US pull-out.

Following a phone conversation with Donald Trump, Turkish President Recep Tayyip Erdogan announced that Ankara would create a 32 kilometre safe zone in northern Syria separating it from the Kurds. Erdogan's spokesperson later elaborated that the security zone would be controlled by Ankara.

The idea was originally proposed by Trump, who threatened on Twitter to "devastate" Turkey's economy if Ankara attacked US-allied Kurdish forces in Syria. In response, Turkey said that it could "remain hungry, without food and water", but would still fight terrorists.

In December 2018, Trump declared victory over Daesh* in Syria and announced the withdrawal of American troops currently deployed in the Arab Republic. Trump, however, stressed that he wants to protect the US' Kurdish allies, while gradually pulling the troops out of the country. His statements came in wake of Erdogan announcing a new military operation in Syria east of the Euphrates, possibly putting Syrian Kurds at risk.

Erdogan's spokesman said that it was a "fatal mistake" to equate Syrian Kurds with the Kurdistan Workers' Party (PKK), which Ankara considers to be a terrorist organisation, and with the PYD [Kurdish Democratic Union Party]/YPG [Kurdish People's Protection Units], which Turkey believes to be affiliated with the PKK.