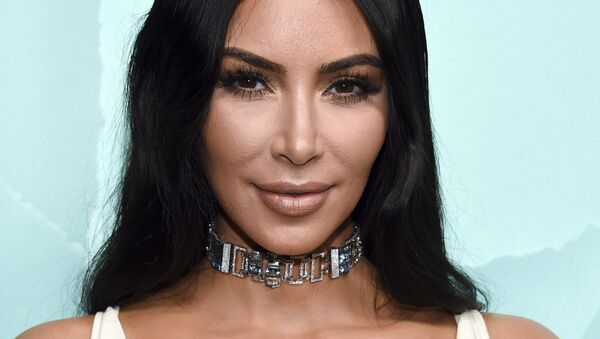 © AP Photo / Evan Agostini
Subscribe
International
India
Africa
All the members of the reality TV clan seem to have a superpower, being able to convert a regular post into a social media sensation with millions of likes, with hordes of people talking about it. One recent debate was triggered by a shot Kim Kardashian took in a parking lot, with some netizens claiming that the celebrity had doctored her photo.

Kim Kardashian’s recent post, with a caption reading “casual for a petco run, Back Grid”, has incurred suspicions that she may have edited her photos to look slimmer. The picture in question shows the voluptuous celebrity, who has garnered fame for her curves, she usually either wraps into tight leggings or let out, posing in front of a couple of SUVs in second-skin, high-waisted trousers and a short jacket.

Casual for a petco run 📷 Back Grid

The post received over 2 million likes, but the regular online success was overshadowed after an Instagram account with the handle @fakegirlsfvckya, busting celebrities using Photoshop, claimed to have spotted foul play in Kardashian’s photo. The debunking video claims that the Instagram influencer might have made her belly look slightly smaller.

However, commenters did not seem to believe these revelations, accusing the “Photoshop police” of doctoring Kim’s snap and asking where they got the notorious “original”.

“They don’t they just re-edit what they post into a more different way and say it’s an original when it’s just this page’s own edited photo”, one user wrote.

Others pointed out that there was very little difference between the “original” and the “edited” snap, saying that it “just seems like the most pointless photoshop ever”.

It’s not the first time that users have suspected Kardashian of editing her photos to look leaner.

During the March For Our Lives in Washington, DC last spring, the social media star suffered a Photoshop faux pas. The 37-year-old was mocked by followers after she shared a picture that was clearly doctored, as there was a squashed car in the background and a curb was bent. It appeared that Kardashian had used Photoshop to lengthen her figure and slim down her thighs, which may have affected the broader background.