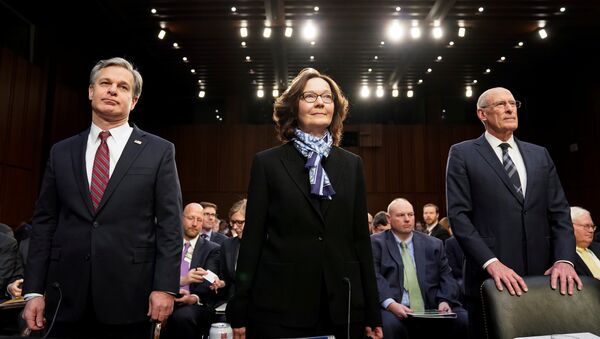 © REUTERS / Joshua Roberts
Subscribe
The move by several top US intelligence chiefs to contradict US President Donald Trump on a number of foreign policy issues sheds light on an internal battle within the Trump administration, Kevin Zeese, co-coordinator of Popular Resistance, told Sputnik.

In complete contradiction to Trump's past remarks, officials indicated that Daesh militants are still a threat in Iraq and Syria and that the terror group still commands thousands of fighters in the region, that North Korea isn't likely to cough up its nuclear arsenal and that Iran didn't violate the 2015 nuclear deal, among other points.

​"What it shows is that we have a long term foreign policy represented by the CIA and the Pentagon, which has led to lots of disasters, never-ending wars [and] regime change operations that are embarrassing, and really spending trillions of dollars where we shouldn't be spending it," Zeese told Radio Sputnik's Loud & Clear on Wednesday.

Trump previously indicated that Daesh had been defeated, and as a result he would be withdrawing the 2,000-strong American forces stationed in Syria. He's also stressed that the Iran nuclear deal, the Joint Comprehensive Plan of Action, was one of the worst deals ever made, and that Iran was in violation of the agreement.

In a bid to strike back at his intelligence chiefs, Trump took his case to Twitter Wednesday, where he suggested to his millions of followers that remarks the intelligence chiefs made in Congress were skewed, and that the current relationship between the US and North Korea is the "best it has ever been."

"It's a competition between a long-term foreign policy establishment versus people trying disruptive, failed foreign policy," he added.

Zeese explained that the foreign policy stance of the intelligence chiefs has been in place for decades, and that no matter how strongly a US president may fight to change it, it stays put.

"It's a very hard job to redirect US foreign policy away from empire and domination… in some way, we have to recognize there's a battle going on in the foreign policy establishment," he concluded.