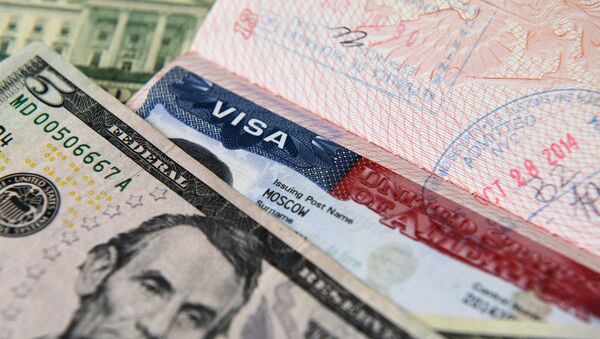 © Sputnik / Sergey Mamontov
/
Go to the photo bank
Subscribe
US authorities have arrested at least eight Indian students on charges of running a “Pay to Stay” visa racket wherein they were facilitating hundreds of immigrants to illegally prolong their stay in the US.

New Delhi (Sputnik) — The Indian government has sought consular access to those students who were arrested on Wednesday after the US authorities busted an alleged "pay to stay" visa racket.

"We are ascertaining more details. Our embassy in Washington as well as consulates in the US is getting in touch with concerned US authorities to provide or extend consular assistance to the people who have been affected", Raveesh Kumar, spokesperson of India's Ministry of External Affairs said while addressing the media in New Delhi.

Six arrests were made in Detroit, one in Florida and one in Virginia; as per the US District Court of the Eastern District of Michigan, Southern Division.

In addition to the eight, an unspecified number of Indian students have been detained by the Department of Homeland Security in connection with the same case. The Indian government also mobilised local community organisations to provide support for those arrested and detained students.

"We have also mobilised Indian community organisations in the US to provide all possible support to the Indian students who are affected by these incidents", Raveesh Kumar added.

To bust the alleged fraud, the US Department of Homeland Security set up a fake university in Farmington Hills to target foreign students who wanted to stay in the US without proper authorisation, according to federal indictments unsealed in Detriot on Wednesday. According to the indictment papers, the eight Indian individuals helped at least 600 foreign nationals stay in the US illegally.

"Each of the foreign citizens who enrolled and made tuition payments to the university knew that they would not attend actual classes, earn credits or make progress towards an actual degree in a particular field of study — a pay to stay scheme", the indictment said.