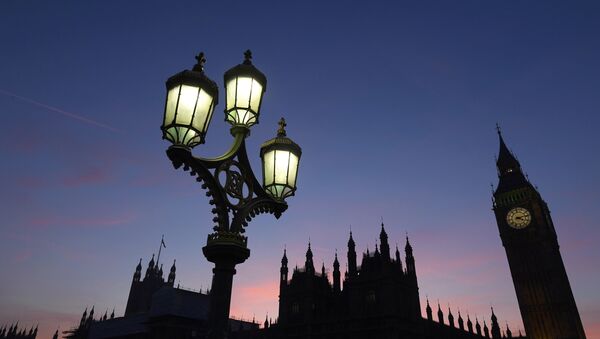 The British Parliament has supplemented a government proposal for the deal with Brussels with two amendments, one of which provides for changing the text of the agreement and, thereby, the resumption of negotiations with Brussels.

Theresa May stood before the Parliament on Wednesday as she answered the parliamentarians' questions after a late night session the previous night.

A heated exchange took place in the House of Commons between the Prime Minister Theresa May and the leader of the opposition Jeremy Corbyn on the latest developments of Brexit negotiations.

The two leaders, who fired accusations at each other over the dead-end nature of Brexit arrangements, are scheduled to meet Wednesday evening to discuss the path forward.

May and Corbyn shd both wear bodycams when they meet at 3pm today. No point in meeting being private, their exchanges will be no different from the lines-to-take in every #PMQs.

Corbyn asked the PM to elaborate on the "alternative arrangements" to the Irish backstop deal in the Withdrawal Agreement, proposed in one of the two backed amendments on Tuesday.

Following the vote last night against no deal, the Prime Minister is again going to attempt to renegotiate the backstop on the basis of finding "alternative arrangements". Could she set out today what those arrangements might be?— @jeremycorbyn #PMQs

Theresa May's response was little short of vague, as she said the government is engaging positively with proposals put forward by the MPs on how an alternative exit mechanism can be reached. The PM however, shared one specific example of such proposals, namely work on the "mutual recognition of trusted trader schemes."

That was a very poor performance from the PM at #PMQs dithering answers and no clear strategy going forward, the spaces on the Tory benches tell a story that the PM is hanging on by a thread and the Tories know it. @jeremycorbyn was concise and clear in his questioning of the PM

The PM launched a counterattack against Corbyn, accusing him of opposing every move by the government to get a deal, while she worked hard to get one.

"He [Corbyn] is the one risking no deal," May said.

The exchange between the two major party leaders appeared to draw on repetitive arguments, previously voiced in the House.

Corbyn insisted again if the government fails to secure any legal changes to the backstop, it should find a solution based on a comprehensive customs union, a strong single market deal and the guaranteeing of rights and protections.

After months of refusing to take a chaotic No Deal off the table, @theresa_may must now face reality: No Deal is not an option.
But Labour’s alternative plan is – and if she fails to negotiate her deal, our plan must be on the table.#PMQs pic.twitter.com/shObMErdd2

The PM said the House voted to reject the no-deal but "it can't be the end of the story," as the only way to avoid a no-deal scenario is to "vote for a deal."

A spat between the PM and the SNP MP Ian Blackord was somewhat of a highlight of the PMQs, as the Scottish politicians accused Theresa May of "inadvertently misleading the House" in her promise for an "alternative arrangement." Theresa May fired back, arguing Blackford's comment that ministers had "ripped apart" the Good Friday Agreement was "frankly irresponsible."

"Here are my principles — if you don't want them I have some more," Blackford remained adamant.

Last week, May delivered a statement on her government's plans for Brexit following the defeat of the withdrawal bill in the House of Commons.