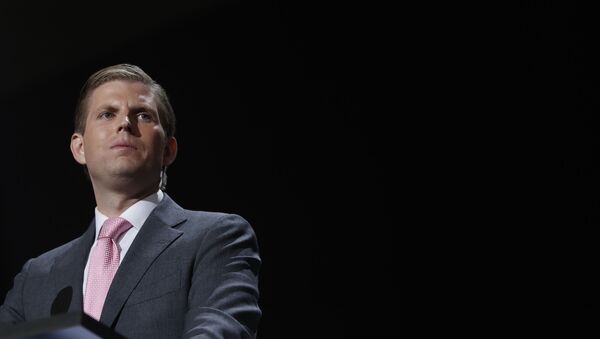 According to Trump Organization Executive Vice President Eric Trump, the new system will make discovering undocumented workers among job applicants much easier than it was before.

The Trump Organization said Tuesday that it will implement an E-Verify system in order to make sure all immigrants employed in the organization are in the country legally, the New York Times reports.

"We are actively engaged in uniforming this process across our properties and will institute E-verify at any property not currently utilizing this system,'' Eric Trump, executive vice president of the organization, said in a statement.

He added that Trump Organization "as a company [takes] this obligation very seriously, and when faced with a situation in which an employee has presented false and fraudulent documentation, [it will] take appropriate action."

Trump’s New South Africa Ambassador a Mar-a-Lago Member, Handbag Queen
The E-Verify system checks documents provided by new employees against Social Security Administration and Department of Homeland Security records. If a mismatch is found, then the person applying for the job is most likely an undocumented immigrant.

While all federal contractors are obliged to implement E-Verify, and some states even require some private and public employers to do so, last month the New York Times reported that not all properties in the Trump Organization had the system installed, speculating that those properties could be employing laborers not legally eligible to work in the US.

Before implementing the system, identifying undocumented immigrants was complicated. A dozen undocumented immigrants were fired from the Trump National Golf Club in Westchester County, New York, earlier this month, according to a Washington Post report. A dozen more were terminated at the Trump National Golf Club in Bedminster.

"I must say, for me personally, this whole thing is truly heartbreaking,'' Eric Trump said in the statement on Tuesday. "Our employees are like family, but when presented with fake documents, an employer has little choice."

Spanish-Speaking Server Allegedly Receives 'Don't Tip Immigrants' Note on Check
According to Eric Trump, discovering undocumented immigrants among the workforce is a problem not limited to the Trump Organization, and it "demonstrates that [US] immigration system is severely broken and needs to be fixed immediately.''

US President Donald Trump has made border security and protecting jobs for American nationals pillars of his political agenda: from the border wall he has pledged to build on the US-Mexican border — which recently resulted in a temporary government shutdown due to Democrats' opposition to the plan — to the workplace raids and payroll audits that his administration has carried out.