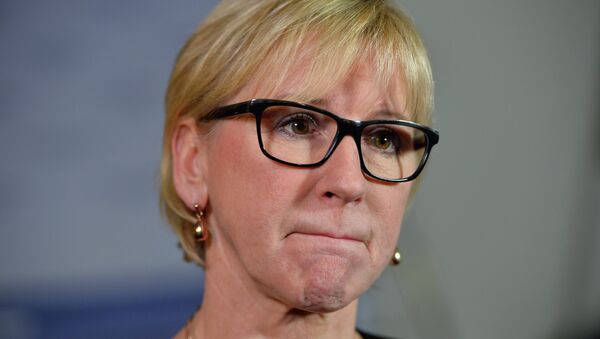 Margot Wallström, Sweden's foreign minister and the architect of the Scandinavian's nation "feminist" foreign policy, has blasted Britain's powers that be for botching the UK's upcoming departure from the EU, which she called a grave error.

Speaking at a conference at the Swedish-Finnish Cultural Centre in Helsinki, Social Democrat Margot Wallström accused British leaders of having "mismanaged" the Brexit process.

"I just think that they've made such a historical mistake and they've really created a problem for all of us" Wallström said, as quoted by Politico. "Our political project, the European Union, will suffer from this immensely and that has to be fully understood", the Swedish foreign minister said.

Wallström went on to accuse the UK of a lack of political leadership.

"This is because of bad political leadership in the UK for a very long time, which I saw during all my years in the European Commission… There was nobody who would defend [the UK's] EU membership", Wallström said. "You should not promise referenda if you don't prepare them properly", she added.

According to Wallström, a long-standing Eurocrat who held a string of posts with the European Commission from 1999 through 2010, hard feelings will remain regardless of what outcome the Brexit movement will have in the long run.

"I cannot forgive them for this", Wallström said.

Sweden's leadership has always been wary of Brexit's aftermath for fear of losing its main political ally and trading partner. According to VoteWatch, Sweden and Denmark are the UK's main voting allies. Before Brexit, Sweden and the UK used to agree on 90 percent of all European issues. By contrast, Germany almost never votes the same way.

Wallström was highly critical of the Brexit movement even before the referendum took place. She has repeatedly warned of a "domino effect" that the Brexit campaign could have on the entire EU, prompting more nations to seek preferential terms with the union and undermine its unity.

Wallström has long enjoyed the reputation of a stalwart EU supporter. In 2005, during her time as EU commissioner for communications, she sparked controversy by linking opposition to European integration to Nazi genocide. During her speech given to mark the 60th liberation anniversary of the Nazi death camp Teresienstadt in today's Czech Republic, she suggested that scrapping the idea of a supranational Europe will put the continent back on the road to Holocaust. In the published version, the controversial passage was removed.

During her years with the European Commission, Wallström, an ardent feminist, also said she was "fed up" with the "EU rule of old men".

Afther British MPs overwhelmingly rejected PM Theresa May's Brexit deal earlier this month, the Commons ruled out the "no deal" option and authorised May to return to Brussels to re-negotiate the Irish backstop, a key part of the Brexit deal. However, an amendment that sought to delay Brexit for two years was rejected. In response, the European Commission immediately sent out a statement saying that the deal was "not open for re-negotiation".

A spokesperson for European Council President Donald Tusk has said that a withdrawal agreement between the UK and EU is and will be "the only way to ensure an orderly Brexit".