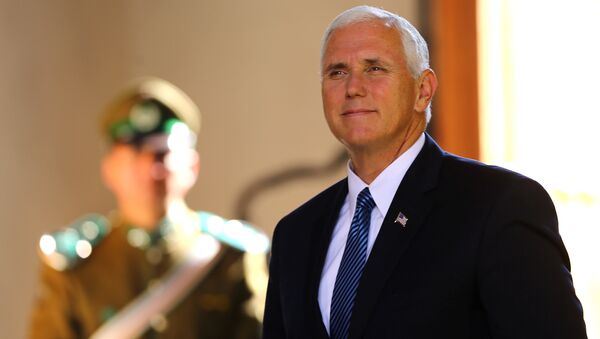 Honored to welcome Amb. @CarlosVecchio, @JulioBorges & leaders of the free gov't of Venezuela to @WhiteHouse. The US strongly stands w/ the Venezuelan Nat'l Assembly & the gov't of Pres @Jguaido. We are committed to seeing democracy restored to VZ through free & fair elections. pic.twitter.com/bFSjSrMTsy

​"The Vice President congratulated both Ambassadors on their confirmations by the National Assembly earlier today… and discussed recent sanctions actions," the release reads.

Venezuelan Defectors in Exile Ask the US For Weapons Against Maduro - Report
On Tuesday the Venezuelan Supreme Court blocked all of Guaido's bank accounts and financial transactions within the country's jurisdiction, launching a preliminary investigation into the activities of the country's opposition leader. It has banned Guaido from leaving the country until the completion of the investigation.

Previously Venezuelan Ambassador to Italy Isaias Rodriguez stated that not a single Venezuelan embassy in the world recognized opposition leader Juan Guaido as the leader of the country.

US National Security Adviser John Bolton said Tuesday that the United States condemns Venezuelan prosecutors for threatening Guaido, and he warned of "serious consequences for those who attempt to subvert democracy and harm Guaido".

On 23 January, opposition leader and President of the National Assembly Juan Guaido declared himself the interim president of Venezuela. The United States and a number of Latin and Central American countries immediately backed the opposition leader, with Washington urging Maduro to step down.

Russia, Cuba, China, Turkey, among others,     have reaffirmed its support for Maduro as the legitimately elected head of state.