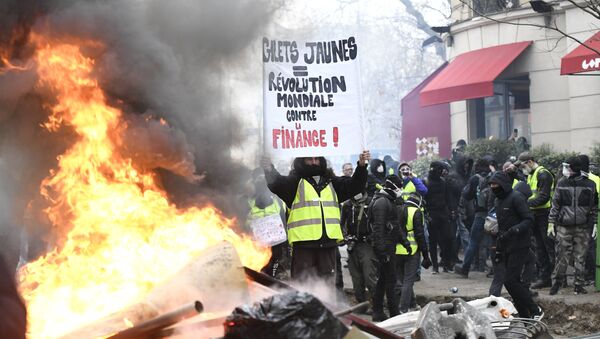 Ekaterina Blinova
All materialsWrite to the author
The failure of France and Italy to lead their economies out of the crisis may bring down the European Community and the euro, Fabien Chalandon, a French private investor, banker, and writer told Sputnik. He explained how the impoverishment of the lower part of the middle class had given a boost to the rise of populism in Europe.

Sputnik: While Eurosceptic parties came out on top in Italy, French President Emmanuel Macron and British Prime Minister Theresa May have found themselves in dire straits. Meanwhile, Angela Merkel announced that she would step down in 2021 as chancellor. What's your take on the changes going on within the Big Four of Europe? What are the major causes behind this shift? Can we compare the ongoing changes to what happened to Europe after the fall of the Iron Curtain?

Chalandon: I think that the main driver of this political shift to populism is the impoverishment of the lower half of the middle class, under the pressure of brutal globalism initiated in the early 2000 which has destroyed across Europe large swathes of industries, regions and their communities, without providing them with the time needed to redeploy activities in new sectors and adequately train manpower. It triggered a massive deindustrialization of Europe for the benefit of China, with the exception of Germany thanks to the longstanding strength of its world class midsized family businesses. This explains Europe's anaemic long-term growth. The famous Anglo-French businessman Sir Jimmy Goldsmith, a born Eurosceptic, said in the mid 90's before his death that the opening of Europe to China was going to destroy its middle class. This is it.

‘Yellow Vest’ Protesters Aren’t May 1968 Students, They’re Sans-Culottes
In addition, massive immigration has exerted a downward pressure on the lowest wages. This second phenomenon was compounded by the policies of some states like France or Italy to increase direct taxes and more insidiously indirect taxes as well as payroll taxes all of which combined, have, since the early 2000, reduced net purchasing power at the lower end of the middle class.

Specific to France, an already overtaxed country, which has become a hostage to its public sector, was the "stupid" wealth tax, enacted by a class of politicians with scant knowledge of basic economics: it has triggered since the early eighties a massive emigration of wealthy investors, the main source of start-up funding in new industries. In the absence of job hungry new sectors in sufficient large numbers to compensate for the shrinking of jobs in traditional ones, France has been kept by its politicians in a state of structural unemployment with close to 30 percent of its youth on the dole, and still over 20 percent today, a major scandal.

Needless to say, that such impoverishment can only lead to an identity crisis, on which populist streaks prosper in every corner of society, but especially in the middle class. To a large extent, this situation is nowhere close to the one Europe faced after the fall of the Iron Curtain, which represented a huge opportunity for Western Europe to regain a foothold in growth striving Eastern Europe.

READ MORE:  It's Unclear Whether EU Will Fall Apart, But Change is Coming — US Investor

From the perspective of its consequence, it is closer to the one Germany experienced in the 1920's when its middle class was destroyed by inflation: impoverishment can stem from hyperinflation but also from overtaxed stagnant income and even more from income destruction nurtured by brutal globalism.

Strangely enough, the UK had so far managed well its drastic adjustment to the new globalist world, with a major influx of foreign industrial investments, thus starting to progressively erode the income gap of its traditional dual economy, London versus the rest of the country. But with Brexit, it is shooting itself in the foot in the middle of this process, with an almost impossible task ahead of retaining or attracting key industries to cater the now closing EU single market. 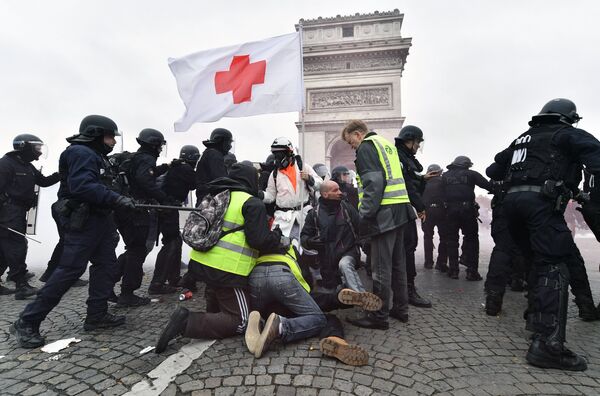 Sputnik: While the US-led unipolar world is crumbling, exposing major flaws in the neo-liberal model, can we expect a large-scale change of elites in the Western world? What forces are likely to come out on top and what sort of "new Europe" could they create?

Chalandon: This is today anyone's guess, as several new generations of politicians are emerging at the same time and they do not have much consideration for the old elites, their ideological stances and their disastrous policies.

The "Gilets Jaunes" in France are one example of what social networks can unexpectedly produce, the new force which is circumventing the state, intermediate bodies such as trade unions and local authorities, as well as traditional media, which are progressively losing their grip on their monopoly of news rainmakers and fakers. To some extent, this is the best safeguard against populists and autocrats, and more importantly against the creeping erosion of the democratic order under the often sneaky spread of digital technology in the areas of monitoring, surveillance, control and manipulation of populations which can now be deployed to the granular level of any selected individual.

READ MORE: Yellow Vests Have Nothing to Do With the Rise of Right in Europe — Author

Majority Thinks Macron Has Not Changed Policy Despite Yellow Vests Rally - Poll
Having said that, the younger generation is more educated, more international and much more pragmatic and deal making than their elders. Will they overcome Europe's main weakness, a polity managed by unelected bureaucrats trying to impose to a confederation of nations a federal state the latter do not wish. I doubt it as to achieve it they would have to collectively decide that nation states and nationalism are a thing of the past: this is certainly not today's trend, as patriotism, the politically correct term for nationalism, is coming back into fashion, especially in large empires such as China and Russia, which have been rightly haunted and historically obsessed by the risk of breaking up.

The optimal size of a local political entity, to which people can daily relate to, and of any combination thereof needed to manage their aggregation, is an old mankind's debate, but the size of this polity is drastically changed by any disruptive technology reducing the sense of time and space: in the old days the size of the basic administrative entity was measured by a man's day walk, then a horse's day walk. What is it today with the mass use of the Internet, plane and car? This is the key question to be addressed, which globalists have not, except in negating the seriousness of its underpinnings when promoting unbridled globalism. 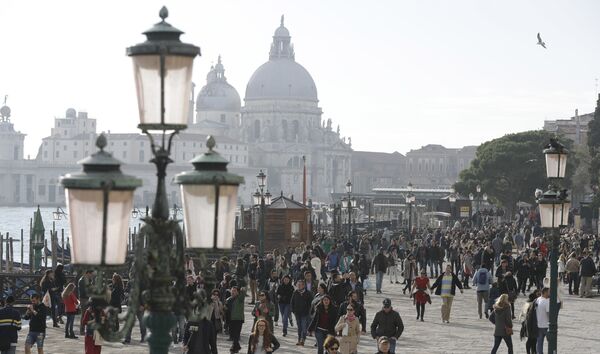 Tourists stroll in downtown Venice, Italy, Saturday, Nov. 12, 2016. Since 1951, Venice's population has steadily shrunk from 175,000 to some 55,000. Several factors are blamed, including high prices driven by a boom in tourism, the logistics of supplying a carless city, and the erosion of canal-side apartment buildings by lapping waters
© AP Photo / Luca Bruno

Analyst on Why Russia-China 'Pole' Provides an 'Alternative to NATO'
Is the US-led unipolar world crumbling? Not really, and if so not quickly. I would not write off the US, as it is by far the largest and most dynamic economy, financing the most technologically advanced armed force, and the only one so far capable of projecting itself anywhere in the world: Russia and China will need another twenty years to reach this level, provided they can foster an economy as strong and diversified as the US to finance it, a realistically unattainable target to achieve over this timeframe.

And whilst Donald Trump has rightly demanded that Europe increases its share of its defence burden, Europe cannot meaningfully respond until France's impoverished economy is revolutionized, by a drastic downsizing of its bloated state and local authorities, and Germany's reluctance to arm itself is overcome and its wealth used to modernize a crumbling defence infrastructure.

The sick region is Europe, with its intractable governance, conflicting policies, anaemic growth due to over-taxation, and way too high a level of public debt which is financing a bloated state and deficit prone health and pension scheme for France and Italy. The failure of these two states could bring down the European Community and the euro: what happened to Greece and before to Argentina provides a clear critical path to what is facing these two countries if a drastic restructuring is not quickly implemented.

This means that EU central bank will continue its QE policy for a while, thus distorting further the interest rate curve, and maintain the current European asset bubble. But Germany's and Holland's patience towards their southern neighbours' lax policies is starting to wear thin.

Fabien Chalandon is non-executive chair of Telnic Limited currently living in Kyoto, Japan. In parallel to his investment banking carrier, he co-founded in France and ran a political think tank, Fondation Concorde, was awarded the French Legion d'Honneur in 2000 and wrote for leading French newspapers on political issues. His father, Albin Chalandon, served as minister of various governments under President Charles de Gaulle and Georges Pompidou and then Minister of justice between 2006 and 2008 in a Jacques Chirac led government under then President Francois Mitterrand.