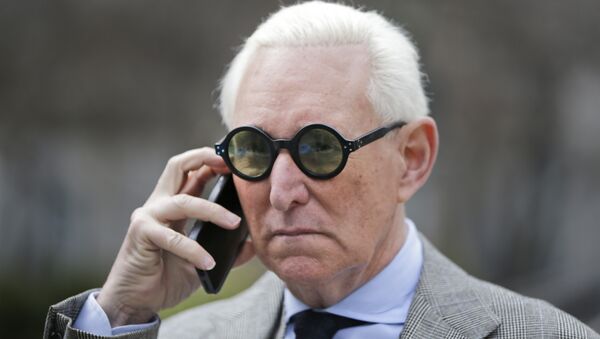 Stone is the latest in Trump's circle to be charged in the ongoing Russiagate investigation, although none of the charges have anything to do with supposed collusion between the Trump campaign and Russia.

Stone's charges by special counsel Robert Mueller and the US attorney for the District of Columbia include one of obstructing a proceeding, one of witness tampering and five of making false statements to the House Permanent Select Committee on Intelligence in 2017, all of which concern his alleged communications with WikiLeaks seeking information about when the hacked Democratic National Committee emails would be released to the public. That communication was done exclusively through an intermediary, believed to be comedian Randy Credico.

Stone's lawyer, Robert Buschel, entered his client's "not guilty" plea at the US District Court for the District of Columbia on Tuesday morning.

"If there's wrongdoing by other people in the campaign that I know about — which I know of none — but if there is, I would certainly testify honestly. I'd also testify honestly about any other matter, including communications with the president." Stone told ABC's George Stephanopoulos on Sunday.

"I will prove in court that any failure of memory on my part was without intent and would be immaterial. I am human, and I did make some errors, but they're errors that would be inconsequential within the scope of this investigation," he continued.

"I have never discussed a pardon," Stone said at a press conference on Friday. "The only person that I have advocated a pardon for, as we have discussed previously, is a posthumous pardon for Marcus Garvey."

Radio Sputnik's Loud and Clear spoke with Daniel Lazare, journalist and author of three books — "The Frozen Republic," "The Velvet Coup" and "America's Undeclared War" — about the case.

Russian to Conclusions? NYT Misreports Manafort’s Ukraine Ties as Russian
Recalling how Stone had appeared to enjoy the spotlight and the drama so far, Lazare told hosts Brian Becker and John Kiriakou that "when Mueller applies the screws, as I'm sure he will at some point, it won't be much fun."

However, Stone's love of the spotlight should not distract from his insalubrious past. Lazare recalled that Stone bragged about instigating the "Brooks Brothers Riot" in Miami, Florida, in 2000, that "essentially halted the vote counts and very possibly swung the election to George W. Bush," Lazare said. "He hangs around with the Proud Boys, the ultra-right fighting group, who are accompanying him now, serving as his sort of armed guard."

"He's a protege of Roy Cohn," journalist Jim Kavanagh told Sputnik on Friday. Cohn was Senator Joseph McCarthy's chief counsel during the Army-McCarthy hearings in 1954 and assisted the senator's investigations of suspected communists. "Cohn is one of the slimiest creatures in American politics, and Roger Stone himself was a self-styled ‘dirty trickster,' part of the Nixon [1972] ‘dirty tricks' campaign," Kavanaugh recalled, the revelations of which eventually caused the Watergate scandal and Richard Nixon's resignation from the presidency in 1974.

Atwater later became George H.W. Bush's campaign manager for the 1988 elections, and Stone a consultant — a campaign that was responsible for the infamous, race-baiting "Willie Horton" ad that suggested that Democratic rival Michael Dukakis was soft on crime.

While Stone claims to have seen the potential for a Trump presidency as early as the pair's first meeting in 1979, Trump long remained dismissive of Stone's antics. "Roger is a stone-cold loser," Trump told New Yorker writer Jeffrey Toobin in 2008. "He always tries taking credit for things he never did."

Stone's made no secret of the fact that he despises Mueller and the entire Russiagate investigation, either, which he's called a "witch hunt" and "a scandal without facts or evidence."

Lazare said Stone won't "keep his mouth under control," despite his indictment, because he "wants to defeat [Russiagate] in the court of public opinion, so he's going around talking up these points wherever he can." Indeed, since his indictment Friday, Stone's done interviews with ABC, CBS and Fox News in which he talked extensively about the case and his side of the story.

However, Lazare cautioned that Stone tried to "build himself up, portray himself to the Trump campaign as somebody with insider information" about WikiLeaks, "and it was clearly untrue. He made a big mistake in going before the House Intelligence Committee and actually telling what appears to be a clear untruth about those efforts."