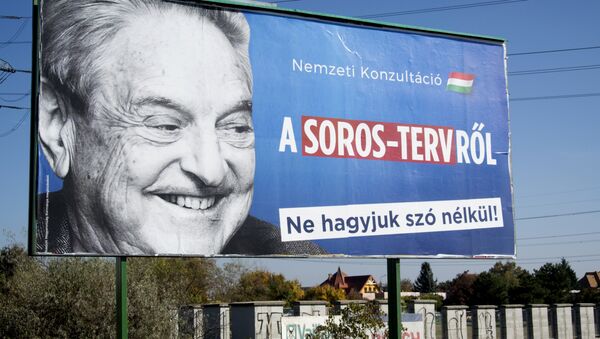 US billionaire George Soros used his speech at the World Economic Forum in Davos as a platform to launch an attack on China. Last week Soros spoke at the gathering of global elites warning that the US and China are locked in a cold war that could soon turn into a hot one and that China’s development of AI posed a 'mortal threat' to humanity.

Sputnik: What are your thoughts regarding George Soros and his remark? Is it a valid point about the danger of machine learning and artificial intelligence in undemocratic regimes, namely in one-party China? Does he have a relevant point when he makes this point against China?

Srdja Trifkovic: Whatever point George Soros makes, you can bet your life that he has an ulterior motive and a hidden agenda, and we have to bear in mind that we're looking at a man who has financed, consistently over the years, some of the most anti-democratic projects that you can imagine, including enforced migration into Europe of the millions the denizens of the world regardless of whether the Europeans wanted it or not, and the imposition of taxes to pay for this. He is primarily an enemy, not of the opponents of the so-called 'open society', but an enemy of national sovereignty in its traditional Westphalian form. He's also an enemy of the multipolarisation of the world; he wants the continuation of the American global empire and that's why he was so opposed to Trump. Because he feared that with the skepticism that candidate Trump had expressed 2.5-3 years ago about the continuity of NATO and its utility after the end of the Cold War, also with Make America Great Again, that it was in fact a hidden call for a return home from global commitments.

Soros is Trying to Prepare Democrats for a Cold War Against China - Scholar
So George Soros sees in China as well as in Russia and he has criticized Putin savagely in the past, he sees in China one of the prime upholders of the traditional concept of national sovereignty and of the kind of multipolar world that he abhor. So I'm not surprised at this remarkable outburst of his, including calls for, effectively, economic warfare, which is very much at odds with his self-proclaimed preference for free trade. Let me also add that if his opposition to the Belt and Road Initiative is on the grounds theft it is primarily motivated by China's interest. Well, of course it is, as well as the interest of the other countries. It's the sort of a give-and-take approach that has been the basis of transactional diplomacy and transactional international economic relations throughout history.

So we're looking at a man who wants to revolutionise the world in accordance with his rather weird image of what this open society should be, without borders, without national cultures and without national communities based on collective memories and based upon a sense of emotional and cultural and linguistic solidarity. A melange of nations, races and languages in which, of course, it would be so much easier for the oligarchs and plutocrats like himself to rule over everybody else.

Sputnik: You've described and outlined George Soros's ideology very well to our listeners, thank you very much. Is there anything that you could say in support or to justify his criticism of Chinese President Xi Jinping in this regard? From his presentation, would you only add to his criticism or would you not support it?

Srdja Trifkovic: I would say whatever initiatives China is undertaking in the field of surveillance, and, of course, the technology will already exist for this, has already been tried in the West and in some instances is being applied, although it's not being widely advertised the way it's being done in China. In fact, with Soros is advocating is a form of velvet-gloved totalitarianism in which the "deviants", people who may be sceptical about the desirability of open borders, will be simply excluded from society and not necessarily incarcerated. So I think that even in the aspects where one might looked askance at the Chinese programme of internal surveillance, we're only looking at, perhaps, more explicit, more overt, and one might even say, a more honest form of surveillance, which is already prevalent all over the Western world, where we have, perhaps, more subtle, but nevertheless, not any less effective forms of control and command.

Sputnik: Just the final point with regard to George Soros and what he said regarding the tech giants such as Facebook that also represent a threat to democracy and that their policies enable China's state-owned companies to catch up, that's what he was saying last year apparently, how does this new threat compare to the one he spoke of this year. Have you got a point on that one?

Srdja Trifkovic: Frankly I don't even particularly care what Soros is saying from one event to another. What is always present, and this is the underlying theme, is an attack on any form of, one, the continuation of national coherence based upon collective memory and internal solidarity of the members of a group that shares genetic, linguistic and cultural traits. And, two, sovereignty as manifested first and foremost in control over national borders and decisions who has the right to reside within a given country and, three, of course, in principle, the notion that any country belongs to the people whose ancestors have built it, fought for it, bled for it and worked for it.