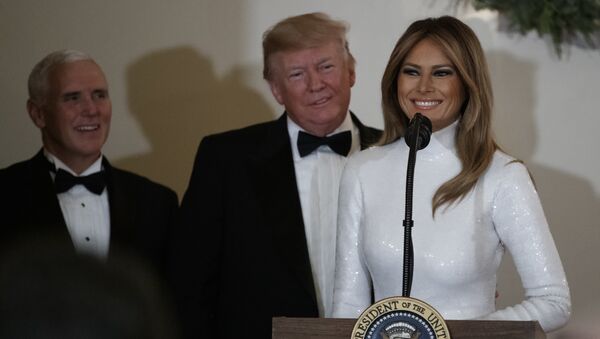 In his new book, Cliff Sims, who worked as a communications staffer for the Oval Office, details the relationship between Donald and Melania Trump, which some depict as rather cold if not downright tormented, according to the Washington Examiner's review.

Sim's book depicts a first lady greatly involved in her husband's presidency, going as far as suggesting staff changes when she spots disloyalty among Trump's aides.

Described as a "savvy consumer of news," Melania is said to spend hours every day going through media coverage of the president — both in print and on TV.

US Lawmakers Reintroduce Legislation to Block Implementation of Trump Travel Ban
On one occasion in 2017, she called the Oval Office to alert her husband about a Politico story citing then-White House Communications Director Mike Dubke as telling other staff Trump needed a "rebrand" and that he lacked a coherent foreign policy. While Dubke denied to the president that he'd made that statement, he eventually resigned about one month after the incident, Sims writes.

Sims also denies an allegation that Melania cried after her husband won the presidency in 2016, a claim made by Michael Wolff in his book "Fire and Fury: Inside the Trump White House." The Daily Telegraph cited this claim in a January 19 story, as well as a number of other rumors, but ended up apologizing to the first lady and agreeing to pay her "substantial damages" for a "number of false statements."

"I know there are many outside the White House who have become invested in the mythology, often backed by anonymous sources, that Melania secretly hated her husband, or was planning to divorce him, or had some business arrangement that kept them together. As with every marriage, they had their good days and bad days," Sims writes. "But from what I saw she never wavered in her support, and she was serious about her official role as first lady and her self-appointed role as her husband's fiercest protector."

Trump Admin Divided in Approach to Second Denuclearization Talks with DPRK
According to Sims, Melania has been supportive of her husband since the election day. An excerpt from the book shows how exactly the family reacted to the election victory.

"The man who is never at a loss for words was rendered speechless by the verdict of history. And he looked, just for the briefest of moments, vulnerable. Sensing this was Melania Trump. Melania was never the person outside observers seemed convinced she was — a reluctant and put-upon spouse who just wanted to escape him. For good or ill, she was in it with him all the way. In that moment, she reached for her husband's hand and squeezed it," the book reads.

"We're going to do this together," she reassured him, "and you're going to be a great president."

000000
Popular comments
When your bought and paid for like a set of car tires, that's the situation she put herself in.