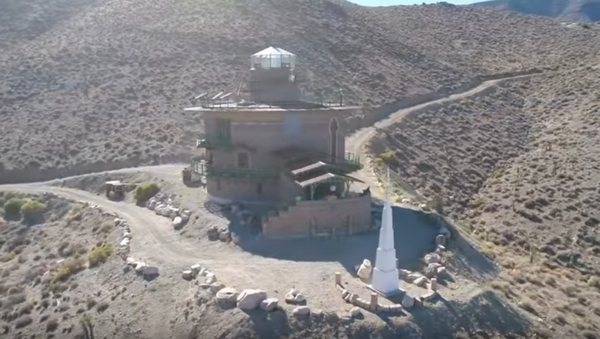 If you’ve always dreamed about living in a castle away from it all, here’s your opportunity.

​The property, which is located at 1 Bonnie Clair Road in Goldfield, Nevada, 187 miles from Las Vegas and 325 miles from Reno, was constructed over 12 years, from 2000 to 2012, according to the property's listing.

The castle has become a tourist attraction in Esmeralda County and is owned by Randy Johnson, a former builder and craftsman who lived in Southern California and Lake Tahoe.

"He built the Castle following his dream to construct something of that magnitude under his own design," Jake Rasmuson, who is marketing the property, told Business Insider. "He plans to fulfill other adventures after the sale."

"In a lot of ways, it's a ‘doomsday prepper' dream home… extremely self-sustaining, secure and — admittedly — quite odd," Rasmuson told CNBC's "Make It," referring to people who like to prepare for the absolute worst-case scenarios of societal collapse.

The castle, which is around 150 miles from the nearest hospital, sits atop a four-acre lot where a "productive but dormant gold mine" existed before World War II, according to the listing.

"Basically this property is an enormous, privately owned fortress with 16-inch-thick concrete walls and self-sustained energy systems using solar and wind, and with a 4,000-gallon water storage/rain catchment system. It's located in the middle of the Nevada desert, and the owner has added two enormous, vintage pipe organs which resonate through the halls [when played], only adding to the oddity of it all," Rasmuson added.

The castle, which has two kitchens, three bathrooms, a full wood shop, wine cellar, theater, game room and a solarium for stargazing, is made out of steel, concrete, cinder block and glass.

Rasmuson did not immediately respond to Sputnik's request for comment.