Moscow Not Planning to Have Any Contacts With Venezuela's Guaido - Kremlin 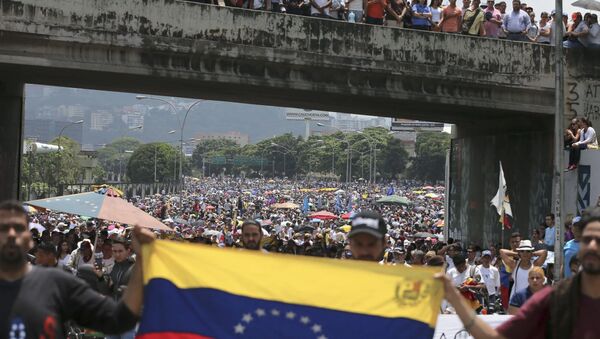 Earlier, the United States and Israel, alongside a handful of other nations, recognised opposition leader Juan Guaido as the interim president.

The Kremlin has not made contact with leader of the Venezuelan opposition, Juan Guaido, and there are no such plans at the moment, Dmitry Peskov stressed.

Venezuelans themselves must resolve the situation in the country within the framework of the constitution, Russian Presidential spokesman Dmitry Peskov said, adding that external interference will only aggravate the situation, so Russia is avoiding this, unlike other countries.

"Now the main thing is that the Venezuelans themselves should settle all the differences that may be between them within the framework of the constitutional field, and the only way we can help is not to interfere in this situation, as some countries directly do. Intervention only aggravates this situation," Peskov told reporters.

"You know, these are conspiracy theory-related reports. It can be seen on the site, security guards in Venezuela, who guard Maduro, think logically. Just don't react to canards," Peskov told reporters.

During the press conference, the spokesperson was asked if any additional assistance to the Venezuelan president, including military and financial aid, was being discussed.

Kremlin has no information on the reported flight of Rossiya special flying squad plane to South America, Peskov added.

"We do not have such information. We do not perform flight dispatching functions," Peskov said.

The squad operates flights of Russia's top officials. Media reported that one of its planes flew to South America on January 19.

US Accepts Guaido's Designation of Vecchio as Venezuelan Charge D'Affaires to US
Last Wednesday, Juan Guaido, the head of the opposition-led National Assembly, declared himself the country's interim president amid the ongoing political crisis.
In turn, Venezuelan President Nicolas Maduro accused the US, which immediately recognised Guaido as interim president, of staging a coup in the country. Maduro announced last week his decision to cut diplomatic ties with the United States and ordered its diplomats out.