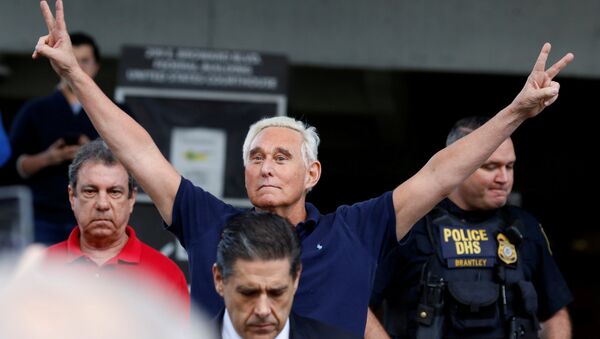 A long-time adviser to US President Donald Trump Roger Stone said on Sunday he would have to consult with his attorneys to rule out whether he will cooperate with special counsel Robert Mueller.

Stone, who was indicted on Thursday by a federal grand jury in Washington on seven counts and arrested on Friday morning in Florida, said that he would testify “honestly” about his talks with Trump, which were “political in nature.”

“That’s a question I’ll have to determine after my attorneys have some discussion,” Stone said on ABC’s This Week. “If there’s wrongdoing by other people in the campaign that I know about – which I know of none – but if there is I would certainly testify honestly. I’d also testify honestly about any other matter including communications with the president.”

Special counsel Mueller, who has been investigating the alleged connection between Trump and Russia during the 2016 US presidential elections, alleged in the indictment that Stone sought stolen emails from WikiLeaks in coordination with Trump campaign officials.

Stone also commented on the accusation that he exchanged messages through two alleged intermediaries with WikiLeaks, noting that these connections “are entirely exculpatory.”

“I will prove in court that any failure of memory on my part was without intent and would be immaterial. I am human and I did make some errors but they’re errors that would be inconsequential within the scope of this investigation,” he said.

Trump Reacts to Roger Stone's Arrest With Call to Indict 'Crooked Hillary'
Earlier on Friday Stone indicated that he would plead not guilty and would not “bear false witness against the President.” He also denied that Trump had ever discussed or suggested pardoning him.

"I have never discussed a pardon," Stone said. "The only person that I have advocated a pardon for, as we have discussed previously, is a posthumous pardon for Marcus Garvey."