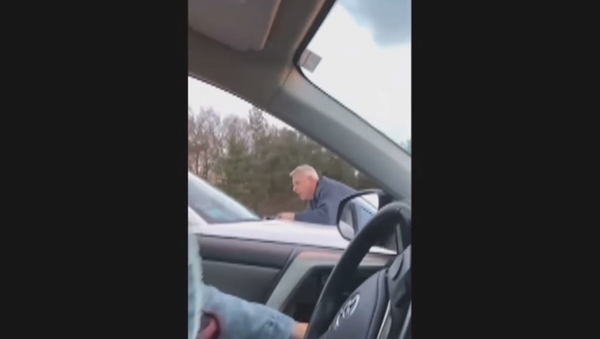 © Screenshot/ News9.com Oklahoma City, Oklahoma
Subscribe
Two residents from the US state of Massachusetts appeared separately at the Waltham District Court on Monday over charges stemming from a bizarre road rage confrontation that unfolded between the pair on I-90 on Friday.

Mark Fitzgerald and Richard Kamrowski were traveling westbound on the Massachusetts Turnpike on Friday afternoon, some 15 miles from downtown Boston, when they wound up in a minor sideswipe-type collision.

According to local media reports, after both drivers pulled over, their verbal confrontation quickly escalated, with Kamrowski nabbing a water bottle from Fitzgerald's vehicle and jumping in front of the car to prevent the driver from speeding away. However, the move wasn't as successful as Kamrowski expected.

When Fitzgerald drove toward Kamrowski, the latter ended up jumping on top of the Infiniti QX70. For the next two to three miles, Kamrowski dangled on the hood as Fitzgerald accelerated, reportedly hitting 70 mph at one point. It was during this time that Kamrowski used the bottle he'd confiscated to smash the windshield.

"I just kept telling him to stop the car, stop the car, and he wouldn't stop," Kamrowski told reporters on Friday after leaving the State Police barracks.. "I thought he was going to run over me, and I don't think he stopped."

"[Fitzgerald] kept going fast, slow; fast, slow, trying to get me to slide off. I wasn't getting off the car," he added.

The road rage confrontation ultimately ended after another driver on Mass Pike was able to get Fitzgerald to pull his car over. Footage of the confrontation shows the unidentified driver, who says he's a licensed gun owner, climb out of his vehicle and order Fitzgerald out of his car at gunpoint.

"Yeah, right! Yeah, right. You were speeding with him on the hood of your car," she responds after Fitzgerald explains that he was actually trying to pull over. Both Kamrowski and Fitzgerald were arrested once State Police officials arrived at the scene. According to local station WBZ4, the good Samaritan that managed to get Fitzgerald to pull over was not charged after it was confirmed that he had a valid license to carry a firearm.

Fitzgerald was charged with assault with a dangerous weapon on a person over 60, negligent operation of a motor vehicle and leaving the scene of property damage. In court, he entered a not-guilty plea, and he was released on a $500 cash bail and ordered to stay away from Kamrowski, the Boston Globe reported. He also had his driver's license revoked.

As for Kamrowski, he, too, entered a not-guilty plea. The 65-year-old was released on personal recognizance.

Both individuals are expected back in court on March 13.