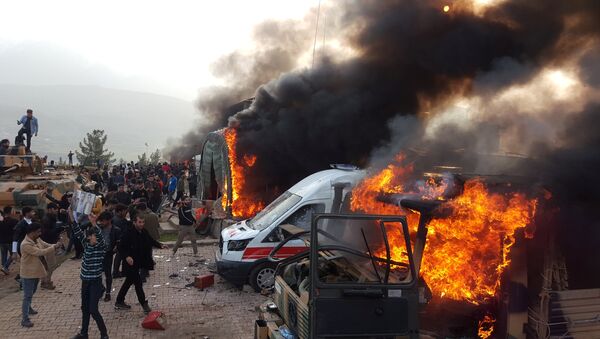 BAGHDAD (Sputnik) - The Iraqi Foreign Ministry has said that it summoned the Turkish ambassador over the death of an Iraqi national as a result of anti-Ankara protests near the Turkish military camp in the country’s north.

"The Foreign Ministry summoned the Turkish Ambassador Mr. Fatih Yildiz and handed him a protest note on the background of the injuries and damage suffered by Iraqi citizens in Sheladize area of the Amadiyah district," the ministry said in a statement released on Sunday.

According to the statement, the note read that Ankara’s "actions are a violation of sovereignty, incompatible with friendly relations and brotherhood between the two countries, and called on the Turkish side to stop such unilateral actions."

On Saturday, protesters stormed the Turkish military facility in Iraqi Kurdistan’s Duhok province in response to the Turkish airstrikes that killed four local residents in the Rashava area on Wednesday. A Kurdish man was killed and several people, including a policeman, were injured as result of clashes near the military camp. Gunfire was reported at the scene, however it is unclear whether the Turkish military or Kurdish security forces, which were seeking to disperse the protesters, are responsible for violence, according to NRT News.