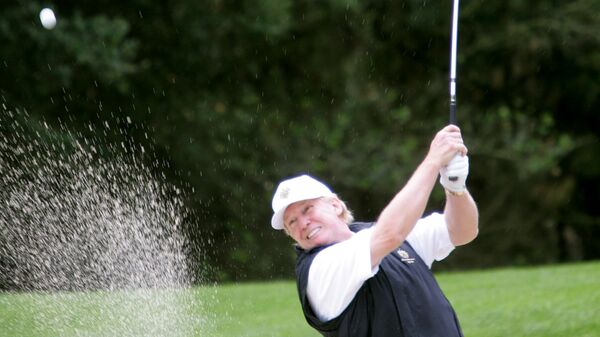 © AP Photo / Jeff Chiu
Subscribe
International
India
Africa
This is the second time in two months Donald Trump's golf club was revealed to have hired undocumented immigrants. In early December, a housekeeper who had worked at his property in New Jersey said that her supervisors had known of her immigration status.

Donald Trump's golf club in New York is said to have kicked out a dozen immigrant workers with fake documents this month.

The club's managers have reportedly been aware that their employees were staying in the country illegally but turned a blind eye to the violation.

"This is bogus. People have been there for 12, 13, 14 years," lawyer Anibal Romero told The Post. He added that one of the migrants had the keys to the bedroom of Donald Trump's third child, Eric.

Eric Trump, Executive Vice President of the Trump Organisation, which operates his father's golf clubs worldwide, has commented on the firings.

"We are making a broad effort to identify any employee who has given false and fraudulent documents to unlawfully gain employment," he said. "Where identified, any such individual will be terminated immediately."

This comes on the heels of last month's revelations from a Guatemalan housekeeper from Donald Trump's golf club in Bedminster, New Jersey, who said she had been working at the president's property for five years without an official legal status.

Victoria Morales confessed that there were other undocumented workers at the club and that at least two managers had been aware of their legal status.

Anibal Romero, who also represents the Bedminster workers, earlier said that he had handed their fake green cards and Social security numbers in to the New Jersey Attorney General's office. The FBI then picked up the case and launched a probe into whether the club's managers had issued the fraudulent documents.

Donald Trump has been a staunch opponent of illegal immigration, which he says poses a threat to national security. He has moved to end the Obama-era DACA programme, which allows hundreds of thousands of illegal aliens who were brought to the US as children to remain and work in the country.

Perhaps a more famous project is his long-promised physical barrier on the Mexico border, which the US president said would stem illegal immigration. The Democratic lawmakers, however, flatly failed to provide the funding for a border wall — something that resulted in a lapse in federal spending and a month-long partial government shutdown.

Trump ordered the government to re-open on Friday, threatening to repeat the shutdown or declare a national emergency if he doesn't have his spending bill on the table by 15 February.