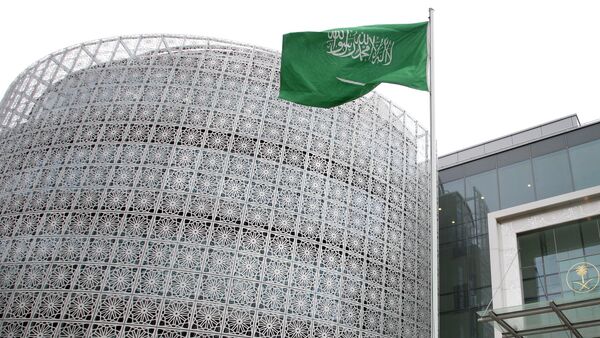 Saudi officials have announced an ambitious investment programme aimed at modernisation and the diversification of the kingdom's economy, as well as boosting the role of private-sector enterprises and industrial production in its GDP.

Kristian Rouz — Saudi Energy Minister Khalid al-Falih says the oil-rich kingdom is seeking to alleviate its reliance on the production and export of energy over the coming ten years, and boost domestic manufacturing instead. His remarks come as the government in Riyadh is seeking almost $500 bln in investments to revamp the entire Saudi economy.

The industrial development plan, announced by the Saudis over this weekend, is aimed at diversifying the kingdom's economy, boosting its fiscal sustainability, and easing its dependence on volatile global energy prices.

German Gov't Faces Suit for Banning Arms Export to Saudi Arabia – Reports
Al-Falih said new investments will be made through the National Industrial Development and Logistics Programme, which is part of Vision 2030, announced by the Saudi government earlier. The broader plan is driven by Saudi Crown Prince Mohammed bin Salman — who recently found himself in the centre of a major international controversy.

Bin Salman, or MBS, as he's known in the West, has been a vocal proponent of the gradual modernisation of Saudi Arabia's economy and — its social life as well, at least to some extent. His Vision 2030 plan and the newly-announced investment programme are aimed at creating thousands of new jobs in the non-oil sector, and boosting the disposable incomes of Saudi citizens.

"The programme targets 1.6 trillion Saudi riyals. It is quite ambitious, but it is over a 10-year period so we have got the time to do it," al-Falih said.

Some say Saudi Arabia could become the 'next big thing' in the Middle East in terms of the production of consumer goods such as clothing. This as Turkey and Pakistan, among other regional economies, have markedly improved exports of consumer goods over the past two decades, successfully competing with the consumer goods heavyweight, Mainland China.

Saudi Arabia Plans Fiscal Stimulus Amid Revenue Windfall
Al-Falih, for his part, said the new programme will be attracting investments from both domestic and international sources. He said parts of the plan are 'ready for negotiations', as first investments into Saudi factories, mining, energy, and transportation sectors are already accepted.

Meanwhile, a second stage of the plan, which will commence at an unspecified later date, is aimed at boosting the kingdom's military-industrial complex, chemicals and petrochemicals, as well as small businesses, al-Falih said.

For his part, Transport Minister Nabeel al-Amudi said Saudi Arabia expects to build some 2,000 km (1,250 miles) of new railways and start 60 new infrastructure projects, including five airports. This part of the plan, the minister said, would cost some 135 bln riyals ($36.18 bln).

"We aim by 2020 that the logistics sector will contribute 221 billion riyals to GDP," al-Amudi said.

The announcements come after several years of budget deficits and sluggish economic expansion in Saudi Arabia. Ever since the massive plunge in global oil prices decimated Saudi budget revenues in late 2014, the kingdom's finances haven't fully recovered — despite a rebound in crude prices.

The Saudi economy was in a recession throughout 2017, and has returned to modest growth of 1.15 percent annually in 2Q18, accelerating to 2.5 percent in the fourth quarter of the same year. However, oil prices fell again in late 2018, and OPEC production cuts have only provided modest support to the market.

Al-Falih said he expects the lion's share of investments to come from the private-sector, either domestic or international, while Saudi budget spending would ideally play a secondary role.

"We will have a huge contribution from the private sector outside the kingdom, but we will leave the bigger share for the Saudi private sector," al-Falih said.

Saudi Arabia Agrees to Finance Rebuilding of Syria - Trump
Meanwhile, MBS expected his Vision 2030 plan to be driven mainly by foreign investments — and Riyadh is trying to gradually improve its international relations in the West and in Asia after last year's controversies.

Saudi Arabia's government also said it plans to improve its transport infrastructure, and expects its new roads, sea ports, railways, and airports to be operated mostly by private-sector enterprises. The cabinet took a classical liberal stance on its plans, saying the government will play the role of a regulator and a watchdog in the modernised economy.