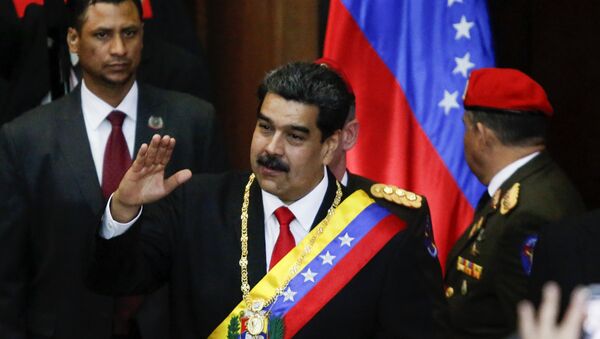 © Sputnik / Stringer
/
Go to the photo bank
Subscribe
BUENOS AIRES (Sputnik) – Venezuela will hold exercises in mid-February, during which its armed forces will demonstrate how they can protect the country during an invasion, Venezuelan President Nicolas Maduro said Friday.

"Our armed forces will have exercises on February 10-15: drills on infiltration into our territory, on protection of territories, coasts, rivers, on military and civil mobilization. Our armed forces make our country unapproachable," Maduro told a press conference, adding that the army was able to resist any imperialist enemy that would come to the territory of Venezuela.

Spain, Germany to Recognize Guaido if Maduro Fails to Set Early Election
Maduro added that Venezuela's people and Armed Forces will prevent the coup that Washington intends to stage.

President Nicolas Maduro also said that Venezuela is grateful to the United States for convening the UN Security Council meeting on the political situation in the country, the Venezuelan foreign minister will travel to New York to defend Venezuela's interests.

"The United States has proposed a debate on Venezuela in the UN Security Council, let it be a debate, we welcome it, this is what we wanted. Thank you very much, Mr. [US Secretary of State Mike] Pompeo. The foreign minister will go to New York… I told the minister that he was going to New York to defend Venezuela," Maduro said at a news conference broadcast on Twitter.

Venezuelan Opposition Leader Guaido Says May Grant Pardon to President Maduro
Maduro said that he saw no reason to resign, since no conditions for this move were in place according to the country's constitution.

During a press conference, Maduro cited the reasons for Venezuelan president to resign stipulated in the country's constitution: death, health condition, dismissal, a decision by the Supreme Court.

"There's no reason why I should leave my post. I am alive, I am healthy. I am not obliged to leave my post due to any of these reasons, and I will not do this," Maduro said.

On Wednesday, Venezuelan opposition leader Juan Guaido declared himself the interim president of Venezuela. The United States shortly afterwards called on Maduro to step down and let Guaido assume his post.

Maduro responded by saying that Washington had attempted to stage a coup in Venezuela and announced his decision to cut off diplomatic relations with the United States. He also suggested that Guaido was a "US puppet." However, on Friday, Maduro expressed readiness to engage in dialogue with Guaido, but the opposition leader ruled out the possibility of communication.