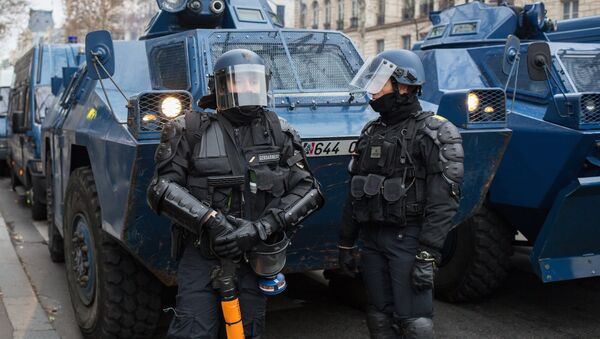 The renowned French landmark has been a prominent feature of the weekly Yellow Vest protests in the French capital, with protesters and police repeatedly clashing near the monument, which was stormed and vandalised last month.

The deployment follows reports of several dozen Yellow Vests protesters gathering near the monument on the Champs Elysees ahead of expected protests on Saturday.

No clashes with police were reported as of 10 am local time.

Arc de Triomphe to Open Wednesday After Being Vandalized in Protests – Officials
Earlier, at a meeting of law enforcement officials, French authorities warned that protests may again descend into violence and riots. Last week, following accusations of police violence, French Interior Minister Christophe Castaner promised that riot police equipped with weapons firing rubber bullets would be equipped with body cameras, calling it a "requirement for transparency."

At least 2,000 protesters and 1,000 police officers have been injured in the Yellow Vests movement, which began on 17 November, initially to protest a proposed diesel tax hike, but has since evolved into a broader movement against Macron's government. Entering their 11th week, there is no still indication of the protests letting up.

The Arc de Triomphe, one of the most famous and revered landmarks in all of France and the pride of Paris, was repaired last month after being damaged in protests by a group of vandals. The damage included spray-painted graffiti demanding President Macron's resignation, as well as defacement with anti-government slogans. The statue of Marianne, the symbol of the French Republic on display at the entrance to the Arc de Triomphe museum, was smashed during the violence.

The Arc de Triomphe stands over the Tomb of the Unknown Soldier, commemorating the 1.4 million French soldiers who died in WWI.