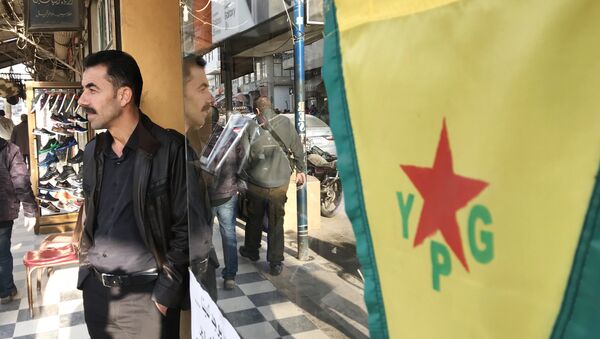 "During his meeting with Jeffery, Akar said that Ankara expects Washington to stop cooperating with the Syrian wing of the Kurdistan Workers' Party — YPG and to implement the roadmap for the Manbij region as soon as possible. He conveyed the sensitivity of Ankara regarding the territorial integrity of Syria and expressed confidence that Turkey and the United States, acting together, can eliminate the accumulated problems," Turkish Defence Minister Hulusi Akar said during a meeting with US Special Representative for Syria Engagement James Jeffrey in Ankara on Friday.

The statement comes after on January 15, Turkish President Recep Tayyip Erdogan said, following a phone conversation with Trump, that the latter had proposed creating a 30-kilometre (18-mile) buffer zone in Syria. According to Erdogan, the future security zone will be controlled by the country's military.

Turkish Forces Strike Kurdish YPG Positions in Tell Rifaat - Reports
In December, Erdogan announced that Ankara was ready to launch a military operation against Kurdish fighters on the eastern bank of the Euphrates River as well as in Syria's Manbij, located near the Turkish border if the United States did not remove the militia from there. He later said that he had decided to postpone the start of the military operation in Syria after a phone conversation with US President Donald Trump on December 14, during which the US president also revealed his plans to withdraw troops from Syria.

Manbij, located in the northeast of the Aleppo province, was controlled by the YPG for several years. The area was passed under Damascus' control amid Turkey's plans to start a military operation there against the Kurdish militia.