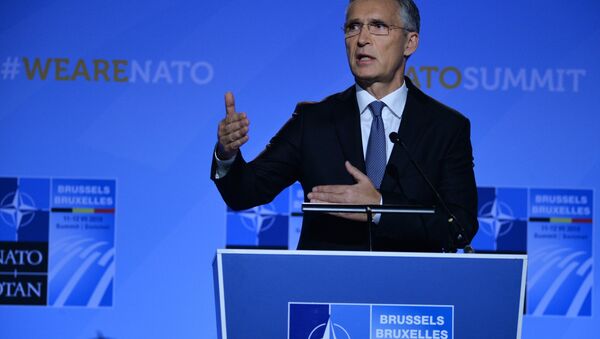 © Sputnik / Aleksei Vitvitsky
/
Go to the photo bank
Subscribe
Earlier on Friday, NATO Secretary-General Jens Stoltenberg has held a press conference after the meeting of the Russia-NATO Council. The meeting focused on the fate of the Intermediate-Range Nuclear Forces Treaty (INF Treaty) in light of Washington's decision to withdraw from the agreement.

The Russian Ministry of Foreign Affairs urged Washington on Friday to abandon its plans to implement a missile defense system in space, noting that such a move may trigger an arms race.

"The United States' implementation of its military space plans will hit the current system of space activities safety resulting from the international space law. All of Washington's previous attempts to achieve superiority in the military sphere invariably resulted in growing tensions and new turns of the arms race," the ministry said in a statement.

According to the ministry, the efforts appear to be aimed at bringing back the so-called Star Wars program or US Strategic Defense Initiative, which former American President Ronald Reagan initially announced back in the 1980s. Moreover, Moscow thinks that the strategy proves that Washington's plans to use space for military operations in the nearest future are real.

The official statement came after Stoltenberg held a press conference earlier in the day during which he said that there was a possibility to save the INF treaty even if the US begins the withdrawal process. He explained that Washington will start the six-month withdrawal process from the accord after 2 February if the US requirements are not met by Russia. Thus, the top official called on Russia to go back into compliance with the treaty, repeating the accusations previously voiced by the US. He added that the deal was 'in real jeopardy'.

Russia Accuses US of Creating Medium and Short-Range Missiles, INF Fate in Limbo
The official also stressed that NATO will continue dialogue with Russia on the deal on different levels further noting that the US didn't want a new Cold War and an arms race.

Commenting on the meeting with Russia over the SS-CX-8 (9M729 cruise missile) that Washington claims doesn't comply with the INF treaty, Stoltenberg said no real progress has been made.

The NATO chief's comments came after late last year Russian President Vladimir Putin said that the United States has provided no evidence to support the allegations of Russia violating the accord.

Moreover, Kremlin, earlier said that Moscow would continue to defend its position on the Intermediate-Range Nuclear Forces Treaty (INF). According the Kremlin's spokesman Dmitry Peskov, Washington was not ready for talks because of the fact that the military attaches from the United States and its NATO allies had ignored the recent briefing on the 9M729 missile organised by the Russian Defence Ministry.

000000
Popular comments
What? Russia has to reduce their weapons while the US can increase theirs? How can this be fair to Russia?
Alan Campbell
25 January 2019, 14:53 GMT2
000000
Approximately, US leaves but Russia stays and INF treaty is saved?!