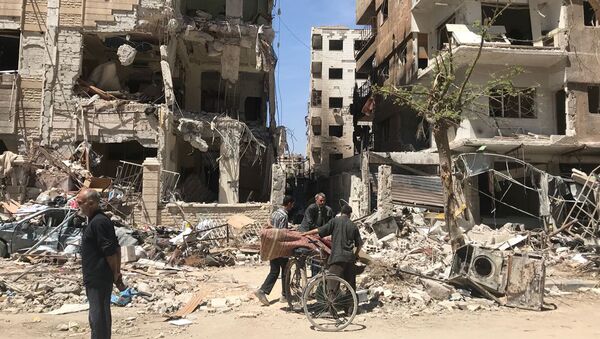 Wednesday saw violent protests in Venezuela's capital Caracas against President Nicolas Maduro, who accused Washington of attempting to stage a coup in his country and moved to cut off diplomatic ties with the United States.

Venezuelan ambassador to Syria Jose Gregorio Biomorgi Muzzatiz has likened the current events in his country with the situation in Syria in 2011, referring to the "same scenario".

He noted that although the Venezuelan opposition uses such terms as democracy, it nevertheless does not recognise the legitimately elected president and has nominated an "unknown" candidate.

"Many [people] have died over the past eight years in Syria, where the amount of destruction is colossal and each and every family has lost at least one of its dear ones. They want to impose the same scenario on Venezuela, but our country will win," Muzzatiz underscored.

He added that all state institutions in Venezuela are working in a routine mode and that the situation on the whole is "normal" and that the authorities have everything under under control.

Muzzatiz was echoed by Chargé d'Affaires of the Venezuelan embassy in Serbia Dia Nader de El-Andari, who argued that the current crisis in Venezuela has been endorsed by the United States, with the support of the European Union, in line with the model of Libya and Syria.

"This is what happened in Libya and Syria, and this is what is happening in Venezuela. A sort of government is being created abroad, and the US and the EU are making other countries start recognising it […] Venezuela has a lot of wealth, and they are interested in natural resources," Nader de El-Andari said.

READ MORE: There Will Be No Snap Election in Venezuela — Envoy to Russia

The Lebanon-based militant group Hezbollah, in turn, said in a statement obtained by Sputnik that it "strongly condemns the US intervention and is totally against a coup attempt against the legitimate government [of Venezuela] initiated by the United States".

"Hezbollah reaffirms its support for President Nicolas Maduro and his elected government," the statement pointed out.

The group stressed that the decision by several nations, including the United States, to recognise opposition leader Guaido as the Venezuelan President does not make him the legitimate head of the country.

"The world understands that the goal of the US intervention is not to defend democracy and freedoms, as Washington claims. The actual purpose is to seize the country's resources," the statement claimed.

Earlier, Venezuelan President Nicolas Maduro cut off diplomatic ties with the United States, accusing it of attempting to stage a coup in Caracas, while Washington, in turn, urged him to step down.

On Wednesday, at least two people reportedly died in Wednesday's violent protests against Maduro, which came amid the opposition's support for self-proclaimed interim President Juan Guaido.

Russian Foreign Minister Sergei Lavrov, for his part, stressed that recent events in Venezuela were a gross violation of the country's sovereignty and blamed the United States for interfering.

Bahram Qassemi, spokesman for the Iranian Foreign Ministry, in turn pointed out that "Iran opposes any interference into the internal affairs of Venezuela, as well as illegal and unconstitutional steps, such as an attempted coup, and supports the government and people of this country."