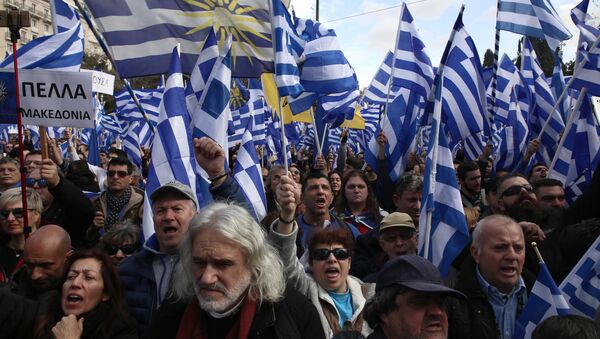 © Sputnik / Kostis Ntantamis
/
Go to the photo bank
Subscribe
Greece and Macedonia, officially known as the Former Yugoslav Republic of Macedonia (FYROM), have been engaged in a name dispute for many years. Athens opposes the use of "Macedonia," which is also the name of a region in Greece.

The Greek Parliament approved the agreement between Athens and Skopje to rename the former Yugoslav Republic of Macedonia to the Republic of Northern Macedonia. This is evidenced by the results of the vote held on Friday in the main legislative body of the country after the three-day debate.

Macedonian Parl't Approves Country's Name Change to Republic of North Macedonia
153 deputies of the 300-member parliament voted in favour of the agreement, while 146 were against it and one abstained. According to the regulations, a simple majority of the deputies present in the hall was enough for ratification of the agreement, but Prime Minister Alexis Tsipras set the goal of ratifying the document with a minimum of 151 votes in the unicameral main legislative body.

Macedonian Prime Minister Zoran Zaev congratulated his Greek counterpart Alexis Tsipras on Friday over the Greek parliament ratifying the agreement between Athens and Skopje to rename the Republic of Macedonia to the Republic of Northern Macedonia.

"Congratulations my friend @tsipras_eu, together with our peoples we reached a historical victory. Long live the Prespa Agreement! For eternal peace and progress of the Balkans and in Europe!" Zaev wrote on Twitter.

The so-called Prespa Agreement on the new official name of the former Yugoslav Republic was signed on 17 June 2018 by the foreign ministers of Macedonia and Greece on the shore of Lake Prespa, along which the border between the two countries passes. In particular, it stipulated the renaming of the Republic of Macedonia to the Republic of Northern Macedonia.

The ratification of the agreement by the parliaments of the two countries opens Skopje's way to NATO and the EU.

000000
Popular comments
They can do that they want without people uprising when the atlantic terroristic alliance must expand. No referendum, no people speak, i Call the people of macedonia and greece to uprise and get the power like in 1917