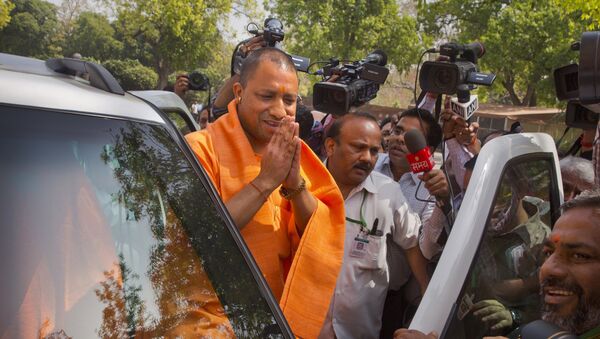 © AP Photo / Manish Swarup
Subscribe
Despite receiving flak at home and abroad for giving the police a free hand in dealing with alleged criminals, Yogi Adityanath, a hardliner Hindu monk who rules the north Indian state of Uttar Pradesh, has listed 78 killings in police encounters as one of his government’s biggest achievements.

The most senior bureaucrat of Uttar Pradesh's administration, Chief Secretary Anup Chandra Pandey, mentioned in a letter to the state's top officials that in the past 16 months 78 criminals were gunned down in police encounters.

Furthermore, he specified that 7,182 criminals were arrested, while 838 criminals sustained injuries over the same period.

The monk called for the statistics to be publicised as the Uttar Pradesh government's achievements in functions attended by officials to observe the country's Republic Day on 26 January, according to a report in The Indian Express newspaper.

Yogi Adityanath, after taking charge as the chief minister of Uttar Pradesh in March 2017, famously said, "If you commit a crime, you will be shot down."

Indian Minister Orders Probe After 3 Officials Filmed Demanding Bribes
Yogi Adityanath's government have attributed the apparent improvement in the law and order situation in Uttar Pradesh as a direct outcome of the chief minister's policy of giving the state police a free hand in dealing with criminals. However, the People's Union for Civil Liberties (PUCL) human rights group has sought the Supreme Court of India's intervention, seeking a court-monitored probe into incidents of alleged police encounters and extrajudicial killings in Uttar Pradesh.

Earlier this month, United Nations Human Rights Council (UNHRC) experts also issued a statement claiming that it was alarmed by the number of alleged police killings in the state. Experts highlighted their concerns over statements issued by high-ranking Uttar Pradesh government and police officials seemingly to incite, justify or sanction such killings.

"We are extremely concerned about the pattern of events: individuals allegedly being abducted or arrested before their killing, and their bodies bearing injuries indicative of torture," the UN body said.

The UNHRC has raised several such cases with the Indian government. The cases mainly pertain to the Uttar Pradesh administration's failure to inform family members of the killings, to conduct examinations of the scene, to provide copies of post-mortem reports to families, and to transfer cases to an independent investigative agency, according to the UN body.

"We have also received allegations of corruption including the police demanding money to release the victim prior to the killing," UNHRC officials claimed.

However, in the Supreme Court of India on 13 January, the lawyer representing the Uttar Pradesh government claimed that the encounters took place in accordance with existing rules.