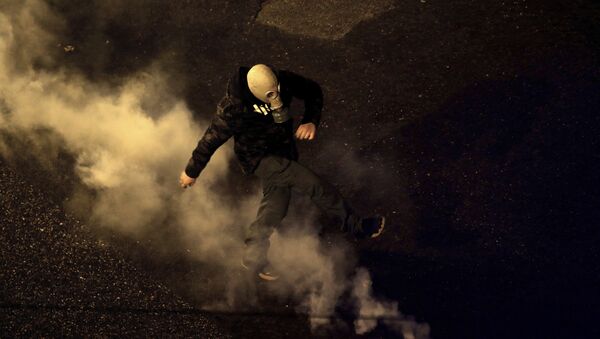 © AP Photo / Petros Giannakouris
Subscribe
MOSCOW (Sputnik) - Over 60 percent of Greeks called the Prespa agreement, which seeks to settle the long-standing naming dispute between Athens and Skopje, "a quite bad" or "a definitely bad" deal, according to a fresh survey by the Pulse RC pollster for the Skai broadcaster.

The Greek parliament is expected to vote on the Prespa deal, which has sown discord in the legislative body, on Friday.

A total of 27 percent of the respondents have a positive attitude toward the deal, while 11 percent have found it difficult to respond, the poll indicated.

As for the snap elections, which could be triggered by the opposition, 30 percent of the Greeks said that the vote was possible, while almost 40 percent think that the election is unlikely and 19 percent said that such a possibility is "moderate," according to the poll's results.

Contentious Vote on Macedonia Name Change & Stepping Stone for NATO in W Balkans
The survey was conducted over phone on January 20-22, among over 1,300 adults, who have voting rights in Greece. The margin error stands at 2.7 percent.

Disagreements over the Prespa deal already prompted then-Greek Defense Minister Panos Kammenos to withdraw his right-wing Independent Greeks (ANEL) party from the ruling coalition earlier in the month. Greek Prime Minister Alexis Tsipras, in turn, called a vote of confidence in his government, which he has won. Greek New Democracy opposition party then has suggested that the country should hold early parliamentary elections.

Greece and Macedonia, officially known as the Former Yugoslav Republic of Macedonia (FYROM), have been entangled in a naming dispute for years, with Athens opposing the use of "Macedonia," which is also the name of a region in Greece. The agreement on the new name for Macedonia – Republic of Northern Macedonia – was signed by Macedonian Foreign Minister Nikola Dimitrov and his Greek counterpart Nikos Kotzias on June 17.

The deal paved the way for Macedonia to join the European Union and NATO, which had been earlier blocked by Greece over the naming issue. The Prespa agreement is widely criticized by various political forces in Greece, who staged massive protests in Athens last Sunday.