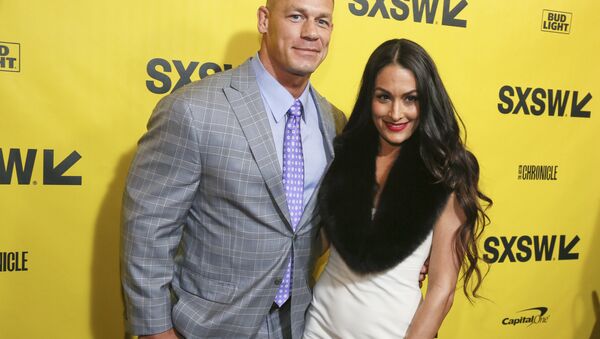 © AP Photo / Jack Plunkett/Invision
Subscribe
International
India
Africa
While Cejudo appeared eager to go toe-to-toe with Cena in the ring, a number of social media users openly wondered whether his fighting skills would be enough to counter the WWE star’s obvious size and weight advantage.

"I'm talking about a ladder match. I'll be the first one to get off that damn ring. And then, I'll be waiting for Bella right at the corner, man!" he declared.

Cejudo’s declaration sent ripples across social media, with people wondering whether the UFC fighter’s skill would be enough to overcome the difference in weight and size between him and his opponent.

I think Cena could throw him across the planet.

Are u dumb Cena beat Randy Orton, Chris Jericho and Big show in a 3 on 1 handicap match and you think he couldn't beat little Cejudo?

​Some were also quick to point out that Bella and Cena broke up a while ago, making Cejudo’s reason to fight Cena seem a bit strange.

She dumped him 6 months ago

I thought she was with that dancer