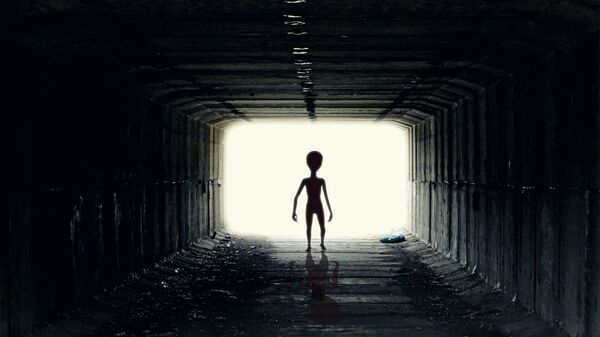 What will happen if we encounter extraterrestrials? What consequences will it have for humanity and how can we prepare for that? Sputnik has spoken to Michael Schetsche, co-author of "The Alien Society. Introduction to exosociology" ("Die Gesellschaft der Außerirdischen: Einführung in Die Exosoziologie") to find out.

Is there life out there? Many wonder about this, but there are different opinions as to the likelihood of such a thing. But there's another important question besides whether there is life out there. If there is contact between Earthlings and aliens, what would that encounter look like?

Sociologists Michael Schetsche and Andreas Anton have tried to answer these questions in their book "The Alien Society. Introduction to exosociology".

Sputnik has spoken to Michael Schetsche, one of the authors of the study.

'Best UFO VIDEO': Object Moving at Lightning Speed Sparks Alien Conspiracies
Exosociology, the doctrine that Schetsche and Anton based their book on, studies the possible paths that the future interaction between the terrestrial civilisation and another, also intelligent, but extraterrestrial, could take. As Schetsche pointed out, the first one to speak of exosociology was the Soviet astronomer Samuil Aronovich Kaplan in the late 1960s. In the book "Extraterrestrial Civilisations. Problems of Interstellar Communication" he and his colleagues analysed all of these issues and were the first to call this program exosociology. The science studies aliens from the terrestrial point of view thus extending sociology beyond humanity giving it a universal scale.

Inhabited Planets and Life in Harsh Conditions — the Causes of Eexosociology

According to Schetsche, the issue of extraterrestrial civilisations has become more important in recent decades for two reasons. On the one hand, humankind has come to know much more about habitable planets.

"We've known for about 20 years that the planets in the Universe are scattered everywhere. According to current estimates, we have 200-300 billion planets in our galaxy", the scientist said.

Alien Life May Exist on Huge ‘Super-Earth’ Mere Light-Years Away – Study
About 1% of these planets orbit a star in an area where life is possible — known as a "habitable zone". As a result, one to three billion planets could be inhabited.

On the other hand, research has shown that life is an "extremely robust" phenomenon. "Throughout the world, where appropriate conditions exist, different forms of life develop". That's why life may well exist in the Universe, despite the sometimes very severe conditions. "Nowadays, our scientific conceptions of the Universe say that it's very probable that there are other intelligences besides the human, and that means that we could find them someday", Schetsche said.

The sociologists used certain futurology methods and created a series of scenarios, that is, they determined some basic parameters and different scenarios of a meeting between humans and aliens. According to the scientists, there are three possible scenarios.

Since we don't have any examples of extraterrestrial civilisations available for research, we must make use of historical analogies that have occurred on Earth when more advanced civilisations have contacted with other "less developed" ones, Schetsche explained. It is what is called "asymmetric cultural contact".

"The conquerors represented "the most technologically powerful civilisation" and repressed the representatives of the weaker civilisation", the sociologist recalled.

We should also remember that, in those cases, the meeting between both cultures always had negative economic, political, and religious consequences for the weaker civilisation, which was not capable of "introducing new knowledge into its own conception of the world", he said. In the end, all this led to the destruction of that civilisation.

The Truth is Out There: New Online SETI Tool Tracks Alien Searches
Taking into account the examples of that type, Schetsche believes that contacting an extraterrestrial civilisation technologically superior to ours could have "serious consequences" for humanity.

As for the artefact scenario, it also raises some concern as the discovery of extraterrestrial technology in the asteroid belt, for example, would likely set in motion a race between states and corporations seeking to seize the technology. These clashes could even develop into wars.

"We fear that we would face rather negative consequences", the exosociologist concluded.

Michael Schetsche's interest in this kind of research stems from two reasons. On the one hand, he himself had almost become an astrophysicist, but then "decided against it in politically turbulent times" and became a sociologist. On the other hand, he is one of the students of the Russian-born Ossip Flechtheim, who is said to have founded the German branch of futurology.

"Futurology has always been a key topic for me. That's why I'm not just asking, what happens now, which is the classic question of sociology; I also wonder what will happen in ten, twenty, or fifty years. Different aspects come into focus. And one of these aspects is the question: what if we were confronted with an extraterrestrial intelligence?" the researcher said.