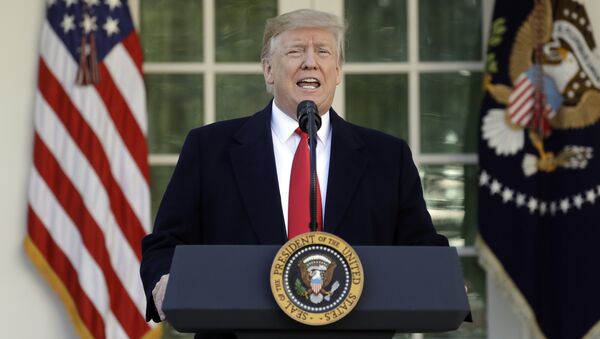 © AP Photo / Evan Vucci
Subscribe
International
India
Africa
US President Donald Trump announced Friday a deal had been reached the reopen the US federal government, which has been deprived of funding for more than a month. The proposal would provide funding until February 15. However, he threatened to use emergency powers if he doesn't "get a fair deal" by then.

It also provides government employees with backpay but, as a continuing resolution, does not fund any kind of border wall.

"I will make sure that all employees receive their backpay very quickly or as soon as possible," Trump said in comments in front of the White House.

He dedicated most of his address to the need for a border wall between the US and Mexico.

"A bipartisan conference committee of House and Senate lawmakers and leaders will immediately begin reviewing the requests of our homeland security experts, and experts they are, and also law enforcement professionals who have worked with us so closely," Trump said. He asked for Congress to put the proposal to a vote immediately.

Approval of a budget has been stalled over a dispute about funding Trump's proposed wall along the US-Mexico border, to which Democrats have objected. Friday's deal provides none of the $5 billion Trump requested for the wall.

"Let me be very clear — we really have no choice but to build a powerful wall or steel barrier," Trump said.

"Walls should not be controversial," Trump said, noting that Democrats have "finally and fully acknowledged that having barriers or fences or walls will be an important part of the solution."

"We do not need 2,000 miles of concrete wall from sea to shining sea, we never did, we never proposed that, we never wanted that because we have barriers at the border where our natural structures are as good as anything we can build …. They're already there. They've been there for millions of years."

Walls, the president said, "keep criminals out. They keep good people from attempting a very dangerous journey to another country… With a wall, they don't have that hope." He further indicated that his plan includes humanitarian support for those being "exploited and abused by coyotes," referring to the human traffickers that prey on migrants traveling through Mexico.

Trump went on to blame "very, very sick" migrants for creating a "health crisis" in the US, although it's unclear to which illness or illnesses he referred.

However, the president indicated that, if he doesn't "get a fair deal from Congress the government will either shut down on February 15 again" or he would use emergency powers to provide funding for the wall, as he has previously threatened to do.

Shortly after the president's remarks, US Senate Democratic leader Chuck Schumer said on the Senate floor, "The longest shutdown in American history will finally end today," and that he expected the continuing resolution to clear the House and be signed by the president later on Friday. The Senate unanimously passed the bill to end the shutdown temporarily late Friday afternoon.