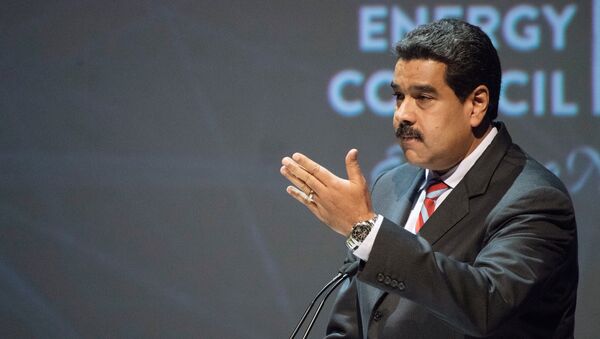 Venezuelan President Nicolas Maduro cut off diplomatic ties with the United States the day before, accusing Washington of attempting to stage a coup d'etat in Caracas. The US, in turn, has urged him to step down, supporting opposition leader Juan Guaido.

The Venezuelan Embassy in the United States has stopped consular services due to the severance of diplomatic relations between the countries.

Meanwhile, the United States has officially requested an open United Nations Security Council meeting on Saturday to address the current crisis in Venezuela, as the US mission to the UN said in a statement on Thursday.

"The United States has officially requested an open meeting of the UN Security Council for Saturday at 9 am to discuss the ongoing crisis in Venezuela," the US mission to the United Nations said via Twitter.

Earlier on Thursday, UN Secretary-General urged all parties in Venezuela to commit to an inclusive and credible political dialogue to address the current developments in the crisis in Venezuela.

US Support for Venezuelan Opposition

The United States has been supporting opposition forces in Venezuela: they have called the country's presidential election illegitimate and promised to back opposition leader Juan Guaido once he steps in as interim president.

Maduro said on Wednesday that Washington had attempted to stage a coup d'etat in Venezuela and announced his decision to cut off diplomatic relations with the United States.

Earlier in January, Maduro took an oath of office to begin his second presidential term, which lasts until 2025.

The Organization of American States, members of the Lima Group — except Mexico — and the United States have refused to recognize Maduro's new term.