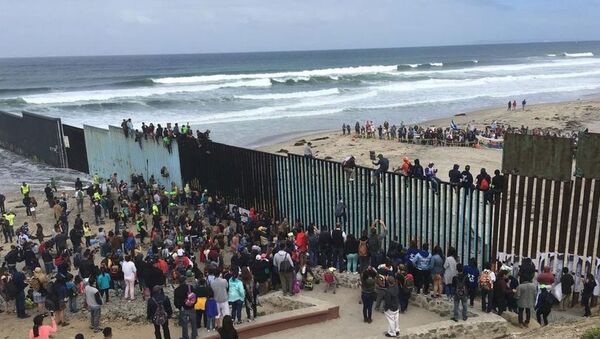 © Twitter
Subscribe
International
India
Africa
The White House said it would consider a short-term, three-week funding bill only on the condition that it includes a "large down payment on the wall," Press Secretary Sarah Sanders said late Thursday afternoon.

US President Donald Trump, the Republican-majority Senate and the Democrat-majority House of Representatives have been unable to negotiate their policy differences for more than a month, leaving approximately 800,000 government workers without paychecks.

As the shutdown headed into its second month, members of Congress began discussing a temporary fix for its problems: a bill to keep the government funded through the first few weeks of February. In jargon, it's called a "continuing resolution" or just CR.

One idea was for a "clean" CR without many bells and whistles, one that would simply allow the government to pay its workers and have more time to negotiate funding for Trump's proposed wall — or "steel slats" — on the southern border with Mexico. The White House responded to this idea of a short-term band-aid by saying it would only consider it if it includes a "large down payment" for a wall.

By definition, once there is funding for overtly partisan-related programs in the CR the bill is no longer "clean." It is technically possible for the government to pass a three-week CR that's not clean, which could mean a new round of partisan brinksmanship would start all over again in early February.

On Thursday evening, the Senate plans to vote on the three-week CR, Democratic Senator Chris Van Hollen (MD) said Thursday. "It will allow federal government employees… to get back to work," the junior senator from Maryland said.

Sens. Chuck Schumer (D-NY) and Mitch McConnell (R-KY) met Thursday afternoon to discuss the impasse after the two bills failed. "If they come to a reasonable agreement, I would support it, yes," Trump told reporters of the meeting between the Republican and Democratic leaders.