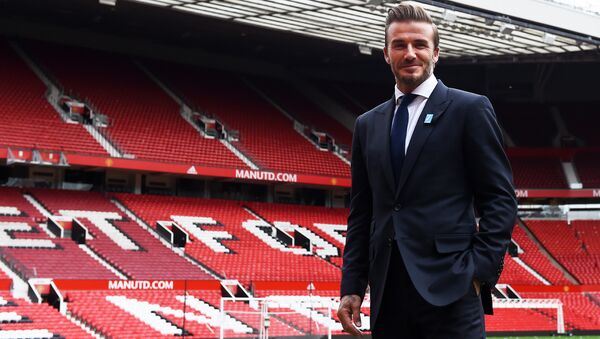 © AFP 2021 / PAUL ELLIS
Subscribe
Salford City, who play in the fifth tier of English football, have created a lot of resentment among their rivals because of the amount of money they are able to offer players to come and play for them.

The team are part owned by several ex-Manchester United players of the so-called Class Of ‘92, including Ryan Giggs, and on Wednesday, 23 January, it was announced that David Beckham himself had bought shares in the club.

Beckham — who is buying 10 percent of the shares — will join Giggs, Gary Neville and his brother Phil Neville, Nicky Butt and Paul Scholes as owners, although businessman Peter Lim will remain the largest shareholder with 40 percent.

Gary Neville said they aimed to emulate Bournemouth, who rose from the fourth tier to the Premier League with small crowds.

Salford — who are based in a working-class district which was once home to gangster "Mr Big" Paul Massey — got off to a flying start to the season and were top of the National League, the fifth-tier division, but are currently in third place, a point behind leaders Leyton Orient.

Eyebrows were raised when they signed Irish striker Adam Rooney from Scottish Premier League club Aberdeen on a reported deal of £4,000 a week, wages which are unheard of at that level of football.

"The response from rival fans is laughable and full of jealousy," Salford fan Nathan Youd told Sputnik in August.

Beckham, 43, was the only member of the Class of ‘92, who had not invested in Salford, who play in the same red and white kit he wore when achieving so much success under Sir Alex Ferguson.

"It's a really special club and a special group of people. My early years in Manchester were all spent in Salford. I grew up there in many ways so to be able to finally join the lads and the club today is a great feeling," Beckham said in a club statement.

The former England, Real Madrid and LA Galaxy midfielder has been heavily involved in setting up Florida football franchise, Inter Miami, who are to play in the Major League Soccer league from next year.

"When the lads got involved in Salford we spoke about us all getting involved. Now I'm able to get involved now Miami is set up. What I've seen them do with the club and the stadium, it's special. We all have ambitions and goals and we've got to have big ones," Beckham said.

Beckham must undergo the Football Association's "fit and proper ownership" test, which all club owners and directors have to face nowadays.

"The next step is getting into the Football League and we know how difficult that is. It would be a dream to be a Premier League club," said Gary Neville at a press conference on Wednesday.

"You look at Bournemouth with 10,000 fans in the Premier League. You look at how they operate, with the manager (Eddie Howe) there a long time. We look at them as an example. But it would be a mistake to look beyond Halifax on Saturday," Neville said, referring to their next opponents in the National League.

Scholes, meanwhile, has been linked with the vacant manager's job at League Two Oldham Athletic, the club he supported as a boy.