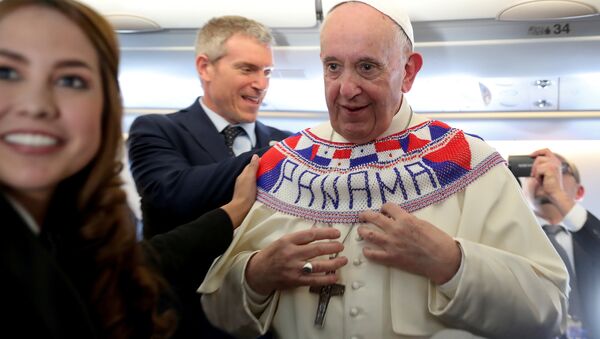 The apostolic trip of Pope Francis to Panama started on 23 January and will last until 28 January with a central event to be the celebration of the 34th World Youth Day, according to AFP.

An unknown man carrying a Venezuelan flag in his hands broke through a barrier a ran towards the Pope's moving car in Panama, AFP reported. The video that was posted on Twitter shows the Pope's car turned sharply into the next lane in order to avoid a collision.

"It was a moment of euphoria… the faith he had towards His Holiness", Domingo Espitia, coordinator of the security forces, said, noting that the believer was not stopped and was able to take his place, according to the AFP.

Papal motorcade and security react with speed when a young man breaks through a barrier and runs towards the pope's car following his arrival in Panama City pic.twitter.com/VDur7LvJUR

On 23 January, Venezuelan opposition leader Juan Guaido proclaimed himself the country's interim president at a mass rally in Caracas. The United States urged Venezuelan President Nicolas Maduro to step down in favour of Guaido with Maduro calling the opposition leader "the US puppet" and saying that Venezuela was severing diplomatic ties with Washington.

READ MORE: Attempted Coup Against Maduro Not US' First in Venezuela

Earlier the same day, Guaido called for a nationwide anti-government protest. The date coincided with the 61st anniversary of the uprising that overthrew military dictator Marcos Perez Jimenez. Meanwhile, supporters of Maduro held a separate rally.