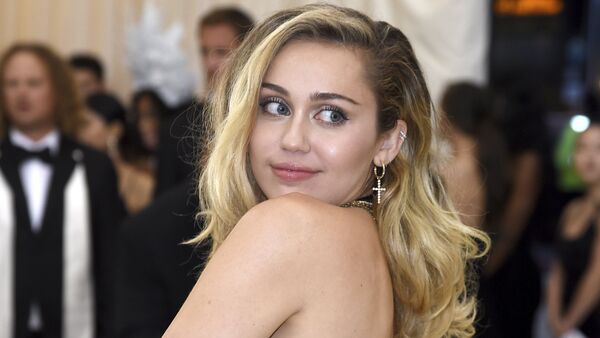 The US starlet surprised fans with a secret wedding to her long-time boyfriend Liam Hemsworth in December 2018. The newlywed marked the New Year with a daring ink job, proving that she might stay true to her rebellious nature.

Child star-turned-hit singer Miley Cyrus has posted several photos from a tattoo parlour on Instagram, revealing she has added to her collection of tattoos. One of the captions showed the smiling star with an artist working on a tattoo on her left arm.

The latest pictures also showed the singer lying on her side with a grimace of pain on her face.

Her fans soon tracked down a behind-the-scenes video of the starlet’s getting the new ink in New York’s Bang Bang Tattoo shop, founded by a celebrity artist who has left his mark on the skin of major A-listers from Rihanna to Justin Bieber. The clip revealed that Cyrus is now having the word “p***y” on her ankle.

Cyrus’ fan army was thrilled with her new daring artwork.

“Should have done it bigger!!!!” one of them posted in the comments, while another wrote “iconic” or “slay queen”.

Some took it even further.

​However, there were those who took a more skeptical stance.

She needs to refresh her understanding of anatomy, that's not where the pussy is on the body

​Less than a month ago, Cyrus wowed netizens by confirming her marriage to her long-time boyfriend Liam Hemsworth, an Australian actor, with images of the embracing couple on her Instagram and Twitter accounts with the caption "10 years later…".

The wedding ceremony was small and attended only by members of the family and close friends, according to the BBC news outlet.

Several weeks later, the pop-star had to refute the recent media publication that claimed the newlyweds were “expecting their first child together”. She posted a sassy response that she’s “not ‘Egg-xpecting’” referring to the latest bizarre social media hit – the most liked egg.

I’m not “ Egg-xpecting” but it’s “Egg-celent” to hear everyone is so “ Happy For Us”…. we’re happy for us too! “Egg-cited” for this next chapter in our lives…. Now, can everyone leave me alone and go back to staring at an egg. pic.twitter.com/uPya87cDSz