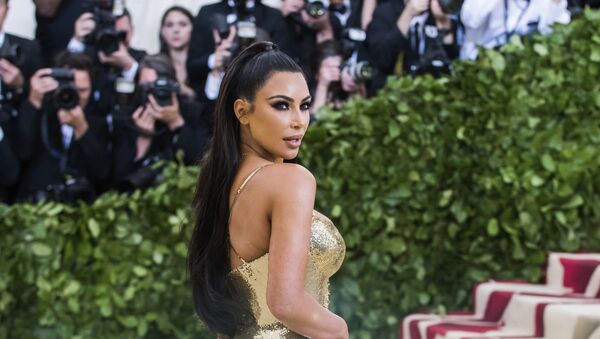 © AP Photo / xxx/Invision
Subscribe
Kim Kardashian earlier shocked her fans, having revealed that she’d rather be stuck in an elevator with Taylor Swift than Drake, whose bad blood with her hubby Kanye West has been making headlines over the past few weeks.

The Keeping Up With the Kardashians star has been told by Hollywood executives to put an end to her long-standing beef with Taylor Swift because the pop star is now part of the Universal Music Group, RadarOnline.com reported.

The label owns the E! network, which produces the Kardashian-Jenner reality show.

“Since Taylor signed her new record deal, she is off limits to Kim. Their war of words is over. Universal owns E! so Kim has to be nice. She was told by the bigwigs”, RadarOnline.com cited an unnamed source as saying.

Last week, Kim told Andy Cohen on Watch What Happens Live that the bad blood with Swift was over:

“No [I haven’t had any communication with Taylor], I feel like we’ve all moved on”, the reality show star said.

In a subtle hint that she’s over the high-profile feud, the 38-year-old make up mogul filmed a bombshell Snapchat video of her chilling out to the tunes of Taylor’s 2017 hit, “Delicate”.

Fans Scratch Their Heads as Kim Kardashian Shows Her Love for Taylor Swift
The bad blood between the Kardashian-West family and Swift goes back to the 2009 MTV Video Music Awards, when Kanye interrupted Taylor’s acceptance speech for Best Female Video in order to say that Beyoncé should have won.

While it seemed that everyone moved on from that awkward incident, the war of words took a new turn in 2016, when Kanye dropped his song “Famous”, rhyming “I feel like me and Taylor might still have sex/Why? I made that b*tch famous”.

Swift was also pictured in the music video for the pseudo-diss song as one of the multiple wax figures of naked celebs in a bed with West. Taylor chastised Kanye for the track upon its release, taking issue with being called a “b*tch” and the fact that the rapper took credit for her successful career.

The rap star said that she was aware of the line, while Swift hit back, saying that she had never approved of it – this is when Kim stepped into the game. She disclosed a phone call recording between the two, which proved that Taylor had in fact endorsed the lyrics and even described them as “a kind of a compliment”.

Kardashian then called Swift a “snake”, which was quickly picked up by her fans, who began bombarding the pop star with serpent emojis.

Taylor, however, managed to use the reference to promote her new music show: she’s been using huge snake statues throughout her Reputation tour, and explained her reason to The Washington Post: