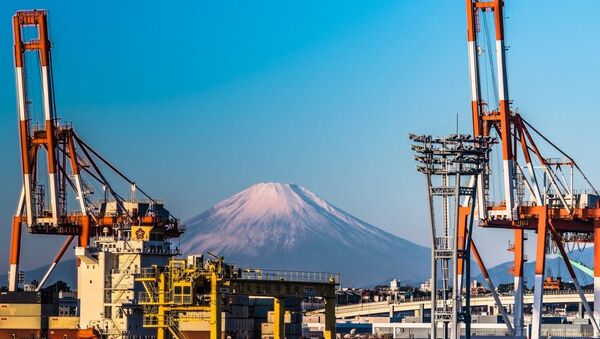 TOKYO (Sputnik) – The Japanese Foreign Ministry said in a statement that a suspected ship-to-ship oil transfer took place near Shanghai and involved a North Korean tanker, thus violating the UN sanctions against the country.

"In the afternoon on 18 January 2019, … AN SAN 1 (IMO number: 7303803), North Korean-flagged tanker, was lying alongside a vessel of unknown nationality on the high seas (around 410km southern offshore of Shanghai) in the East China Sea … Following a comprehensive assessment, the Government of Japan strongly suspects that they conducted ship-to-ship transfers banned by the United Nations Security Council Resolution", the statement reads.

The ministry added that AN SAN 1 was blacklisted in March.

Japan's $3.5-Trillion Stimulus Drives Wealth Polarisation, Hardly Helps Economy
Pyongyang has been subject to numerous UN sanctions over the past 10 years for its nuclear and ballistic missile tests.

The sanctions target North Korea's exports of natural resources, such as coal, imports of weapons, oil, petroleum products and any financial and material support that could contribute to the development of the country's missile or nuclear programs. Tokyo has repeatedly said that it witnessed suspicious ship-to-ship transfers of goods to North Korea that may be coming in violation of the UN sanctions.