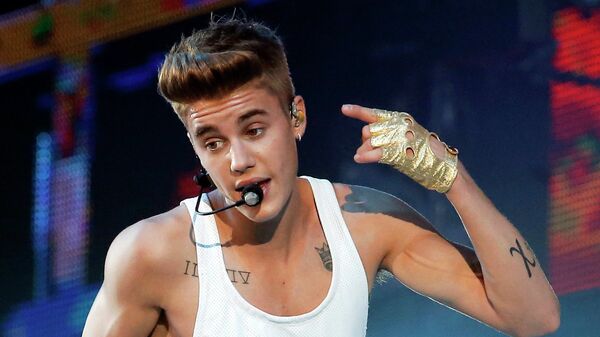 © AP Photo / Francois Mori, File
Subscribe
International
India
Africa
The R&B singer was detained in Paris after a 24-year-old French model accused him of trying to rape her during a party there. As soon as he was released without any charges, Chris Brown got back to Instagram, strongly denying all the accusations.

Justin Bieber has landed in hot water after he reached out to Chris Brown on social media to pep him up following his release from custody over the rape accusations brought against him by a 24-year-old model in Paris. The R&B star, known to be friends with the Canadian singer, posted a video from a rehearsal on his Instagram account as soon as he was out of custody.

Justin Bieber demonstrated support for his friend with a comment “No one can touch you ur the GOAT”, which prompted a social media storm as many rushed to call him out for endorsing Brown who has a history of assault accusations, including the one against his ex-girlfriend Rihanna in 2009.

Justin Bieber supporting Chris Brown. A shame, so many artists throwing themselves under the bus. First, Kendrick Lamar supporting R Kelly, now just as Justin Bieber was garnering support from the GP and starting to age like wine, he cancels himself. Disgusting. pic.twitter.com/1TUDnLtzwy

​Some voiced their disappointment with Bieber, tagging him in comments under the video and posing questions like: “What is happening? You are disappointing me… You must be a man of God and not a bad man”.

Others were even more categorical, pressing him to delete his words of support in all caps or “reconsider publicly supporting a violent abuser”.

Some shared their revolt on other social media platforms and even setting up an intervention for Bieber on Twitter.

no one can touch Chris brown, but he can touch anyone without their consent? justin bieber should’ve sat there and ate his food- https://t.co/DTZB7AJaDv

​However, some tried to put in a good word for Bieber and Brown.

Y’all trying to cancel Justin Bieber like Chris Brown hasn’t already been let go for the FALSE allegations brought against him. Yes Chris Brown made a mistake with Rihanna 10 YEARS AGO, but to keep trying to crucify him for his past mistakes is bullshit.

you mean to tell me people mad at justin for supporting chris? the same justin that got discovered by a chris brown song. the one that has songs and video with chris? the justin bieber that brought out chris? JUSTIN WHOS BEEN A FAN OF CHRIS BEFORE HE EVEN BECAME FAMOUS. REALLY.

​French police detained Chris Brown on Monday after a 24-year-old model, whose name has not been disclosed for legal reasons, claimed that she was raped by Brown, his friend, and his bodyguard during a party earlier this month. The R&B star was released from police custody without charges as well as two other suspects on 22 January and permitted to leave France after being held for questioning overnight.

While the Paris prosecutor’s office said that the investigation was still underway, Brown took to Instagram to proclaim his innocence, insisting that the allegations were false and “against my character and morals”, posting an image with three simple words: “This b*tch lyin’ [sic]”. However this post was later deleted. Brown also plans to sue the accuser, according to the singer’s Parisian lawyer, Raphael Chiche.

“A complaint for slanderous denunciation will be filed tomorrow with the public prosecutor of Paris”, the lawyer said.

This isn’t the first accusation against Brown. In 2016, he was arrested on suspicion of assault with a deadly weapon after a woman told police he had threatened her with a gun and in 2009 he received five years’ probation and a community service order for assaulting his ex-girlfriend, Rihanna, in his car.