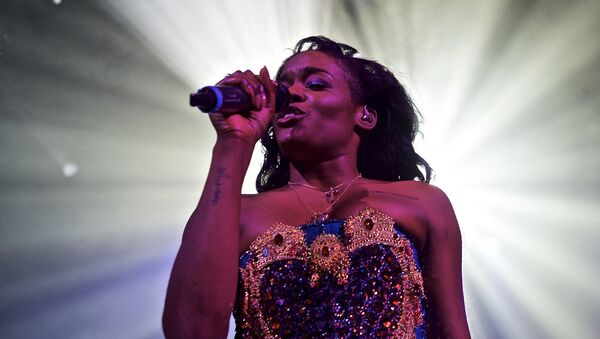 Nothing spelled trouble as the American star rapper shared an Instagram story from London’s Gatwick Airport on Monday while en route to Dublin to perform at a gig, prompting Connor McGregor to comment in anticipation of her arrival: “See you soon”.

However, after Banks’s outburst during the boarding of her plane, she stormed off it and opted for another way to get to the Irish capital for her show — by road and ferry.

On Monday, an air passenger said that an Aer Lingus air hostess had asked Banks “Are you going to cause more trouble on this flight?” when the star tried to put her bags in the overhead locker, preventing others from making their way to their seats. According to the passenger, Azealia said something to her friend about it being a power play and pointed out that “she is famous”, with the flight attendant countering her by saying: “I don’t care if you’re famous”. After a moment’s hesitation and another sassy exchange, Banks left the plane, shortly writing to McGregor: “'Conor they are bullying me. Help me:(“, adding a sad smiley.

“Azealia was at the front of the plane and the stewardess was trying to hurry her along. She said the attendants were harassing her and I think they were a bit heavy handed”, the passenger was cited by the Daily Mail as saying.

“I’ve worked too hard in my life to be cornered by some f*cking ugly Irish b*tch. These f*cking ugly Irish women here”, Banks said when disembarking the Aer Lingus plane, saying thereafter, in foul language, that she had been “treated like a wild animal” on what she called her “travel day from hell”.

“I get off the plane. I've worked too hard in my life to be cornered by some ugly Irish b***h. They are ugly Irish women here. Then all these security n***** come over treating me like a wild animal. They tried their hardest to get me to do something or freak out”, she said as part of her lengthy tirade.

A day after her Dublin gig, which she dedicated, paradoxically, to “the beautiful Irish women that are here”, she took to her Instagram account to respond to a bunch of her subscribers’ comments.

Alluding to the Great Famine of Ireland in the 19th century, when over one million Irish people died from starvation and disease, she replied to one follower: “Don't you have a famine to go die in?” In another offensive comment to an Irish netizen, she wrote: “Because most of you can't talk or write lol”. She went still further in subsequent replies, calling the Celtic nation “a bunch of prideful inbred leprechauns who have ZERO global influence and ZERO white privilege”.

“The rest of the world's white folk don't want to associate with you lot at all and it's because you are barbarians”, she wrote, rounding off her comment.

Continuing her rant, she expressed joy at knowing that “the Irish are quarantined on an isle so they can continue to inbreed and keep their defective genes away from humanity”.

The comments triggered a storm of reaction online, with users chewing over the “racist” nature of her comments as well as the fact that the concert venue was “half-empty”:

“Don’t be racist towards the Irish, then say you love our capital”, one wrote, with another weighing in:

“She’ll look better getting a potato smacked at that 8ft forehead”.

“Yeah maybe you’ll have a bigger attendance than my local hockey games next time”, another stated, while others stressed that Banks would be better off “using her mouth for singing”.

This isn’t the first time that Banks has publicly resorted to outrageous slurs: she famously launched a foul-mouthed tirade at a flight attendant, calling him a “f***ing f***ot” when she was unable to get off a Delta plane in 2005.