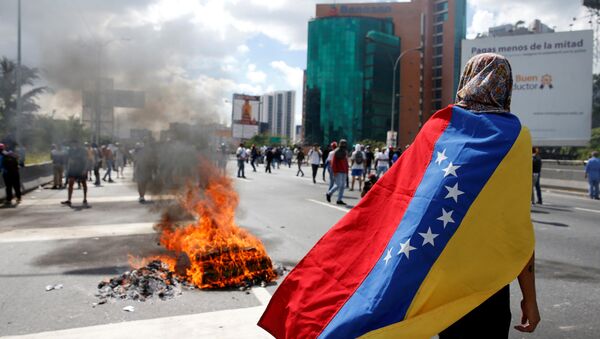 Sputnik: Do you think that the confrontation between the protest movement and Maduro will reach a peak in 2019, or are we about to witness events similar to those that happened in 2014 and 2017?

Arnaldo Espinoza: 2014, 2017 and 2019 are different circumstances. 2019 adds the pressure of the international community, this time led by president Trump and the regional Lima Group. Also, you have a humanitarian crisis that wasn't present in 2014 and was just beginning in 2017. I would expect less action in the streets and more on the diplomatic front.

Venezuela Breaks Diplomatic Ties With United States, Orders Diplomats to Leave
Sputnik: What kind of reaction can we expect in Venezuela after Mike Pence issued a video where the US officially backed opposition leader Juan Guaido.

Arnaldo Espinoza: From Maduro's government, same as always: The US is meddling in Venezuela's internal affairs. From the people in the streets? I think they are aware that these kinds of statements are important but are not going to tip the scale.

Sputnik: After today events (Juan Guaidó announcment and Trump decision to recognize him) Does this really change whole dynamic of this protests?

Sputnik: It's been reported that the Venezuelan army is no longer united regarding the protest movement and Maduro. Could this lead to an open confrontation between factions in the military?

Arnaldo Espinoza: That is unpredictable. We know that the hierarchy supports Maduro's government. But we don't know anything about the middle-rank officials, who have troops under their command and firepower.

Arnaldo Espinoza: They have. And they will, if necessary. Both president Duque and president Bolsonaro have stated that they will work towards reestablishing democracy in Venezuela. They also face pressure within their countries due to the uncontrolled migration coming from Venezuela and it is in their best interest to find a solution.

Sputnik: Some moderate leaders of the protest movement have proposed round table talks and a peaceful transition of power. Do you think both sides are still willing to talk to each other?

Arnaldo Espinoza: There are factions within each group willing to talk. For the opposition, sitting with government officials will be viewed as a huge step backwards