Fund the Wall or It’s My Downfall 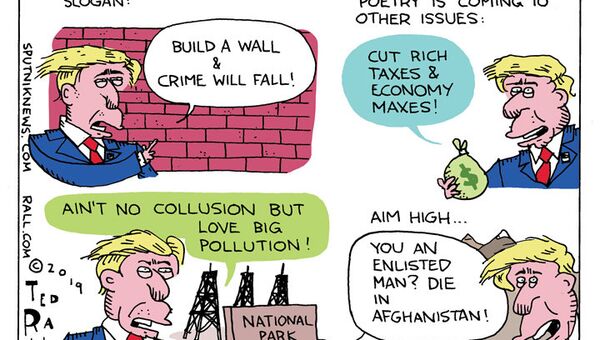 © Sputnik / Ted Rall
Subscribe
International
India
Africa
With the partial US government shutdown on its 33rd day, US President Donald Trump’s Twitter fingers were hard at work Wednesday morning composing a series of tweets in support of his own border wall. This time around, 45 included a new Republican “theme” chant.

The government shutdown is easing into its mid 30s and Trump appears to be grasping at straws when it comes to persuading the American public and Congress to fund his $5.7 billion wall along the southern border with Mexico.

With notable phrases such as "lock her up" and "make America great again" chanted with vigor at countless Trump political rallies, the US president attempted to revitalize his base and rope in Republicans with a new "theme," as he likes to call it, for the next two years: "BUILD A WALL & CRIME WILL FALL!"

BUILD A WALL & CRIME WILL FALL! This is the new theme, for two years until the Wall is finished (under construction now), of the Republican Party. Use it and pray!

Asserting that the border wall is already under construction, 45 also added that the Republican party has "great unity" in efforts combating "stoppable crime and drugs."

Though the subject of drug trafficking has been effective in demonizing those seeking asylum and advocating for the border wall, US Drug Enforcement Administration's 2018 National Drug Threat Assessment highlights a "majority of the [heroin] flow is through POVs entering the United States at legal ports of entry, followed by tractor-trailers, where the heroin is co-mingled with legal goods."

The report maintains the majority of cocaine distributed by Dominican traffickers is from Colombia and heroin predominantly originates from Colombia and Mexico. It seems the billions poured into the US-Mexico border wall could be better used to bolster agencies already tasked with inspecting those who pass through legal ports of entry.