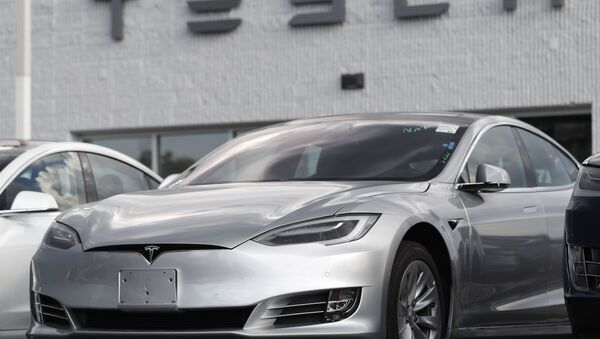 © AP Photo / David Zalubowski
Subscribe
International
India
Africa
The “sentry mode” will stand guard by either keeping the dash cam on while a car is parked, or by rotating automatically if the car is hit on the road.

One frustrated Twitter user and Tesla owner, who suffered a dent within the range of the car’s rear-facing camera, appealed directly to Elon Musk on Twitter, saying that there should by all means be a special feature on the dashboard that utilises the car’s variety of sensors for 360° surveillance.

Musk responded saying that the “Tesla Sentry Mode” is coming soon — which is precisely the feature the user made an enquiry about.

The tweet suggests that the new feature will be soon found in all cars with the so-called Enhanced Autopilot and is expected to be available for an additional fee; however, Musk shortly after clarified the issue, saying that all cars with the most recent “AP2+” hardware would be equipped with the feature, specifically, ones that rolled off the assembly lines in 2016 and later.

I am totally not concerned about Tesla cars with over-the-air remote data connections with cameras pointing in various directions at all times in public and semi-public places, subject to the internal self-regulation of Elon Musk. https://t.co/N3RpNxUOTb

It could see a Tesla's cameras switch on automatically. https://t.co/S0MOVb66sC

Tesla enthusiasts instantly took to Twitter to repost the news — however, many seemed to be “not concerned”:

Tesla is simply the best! ⭐️ Certainly better than all the rest. 🎵

You know, like that camera you taped over on your iPad and laptop! #tesla #1984 https://t.co/NapJmfp58D

Hilarious memes on the subject also flooded the Internet, with users unable to resist the temptation to speak about the potential blemishes:

Bundled with “Not a Flamethrower”? pic.twitter.com/yM86guufdF