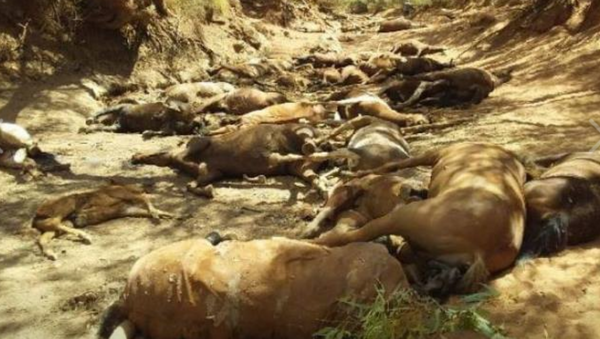 © Facebook/AliceSpringsCommunityForum
Subscribe
Around two dozen feral horses have been found dead at a dry waterhole in Central Australia, most likely due to an extreme heatwave in the region.

The free-roaming horses of domesticated stock, which are known as brumbies in Australia, were discovered by artist and activity engagement officer Ralph Turner at a waterhole 20 kilometers from Santa Teresa, Australia, known as "Deep Hole," reported the Australian Broadcasting Corporation. The deaths of the horses are believed to have been caused by a 12-day stretch of temperatures above 42 degrees Celsius in the region, according to ABC News.

​"We we found all these poor horses, all perished," Turner recently told ABC News.

"We've been having hot weather, day after day. I just couldn't believe something like that happened out here, first time it happened like that," he added.

According to Santa Teresa Media Mentor Rohan Smyth, the horses most likely died from dehydration.

"The wild horses have gone down there looking for their water which is normally there [Deep Hole], and it's not been there, so essentially they've just had nowhere to go," Smyth recently told ABC News.

"And unfortunately they've just perished from the dehydration and the heat, so it's pretty shocking stuff," he added.

Horses are an important part of Australian history. The animals first arrived in Australia in 1788 with members of the First Fleet, who departed Portsmouth, England, in 1787, and became the first European settlement in Australia. The horses were imported for farm and utility work, and the strenuous journey by sea from England, Europe and Asia to Australia meant that only the hardiest animals survived. As a result, Australian horses are known for their strength and health. In 1810, horse racing became a popular activity in the country.

Many people in the Santa Teresa community, who feel a rich connection to horses, are "deeply concerned about the welfare of the local wild horse population," Smyth told ABC News.

"There's a lot of horses here in town, and a lot of them are used for school projects and stuff, and they sort of live around the town center, and a few of them are broken in," Smyth said.

"But the really wild horses, they don't come into town at all, so they can't get any of that water that is in town. They are feral animals, so essentially they do have an impact on the environment, and they do use up the resources that other animals might use. But it's still pretty horrible to know that they've had to suffer in that extreme way," he added.

The heatwave in Australia has also affected other animals in the region, including multiple camels near Docker River in Kaltukatjara, which is a remote indigenous community in the Northern Territory of Australia, Smyth added.

Smyth did not immediately respond to Sputnik's request for comment.

The heatwave is expected to last until January 26. According to the Australian Bureau of Meteorology's State of the Climate 2018 report, the country should expect "further increases in sea and air temperatures, with more hot days and marine heatwaves, and fewer cool extremes."