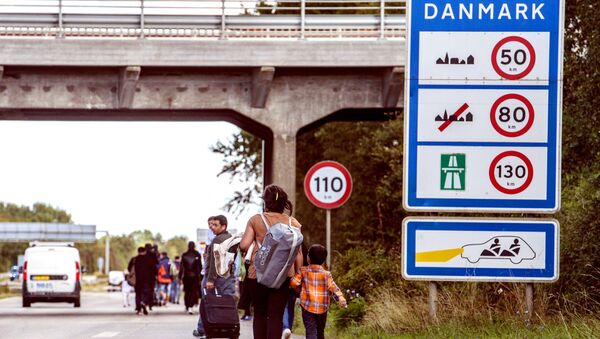 Despite what is often described as a "crackdown" on immigration, Denmark remains one of the most desirable countries for asylum seekers from across the world, contradicting attempts to portray it as an uninviting place.

Following the gradual toughening of Denmark's immigration legislation, it has become a common trope among "progressive" media outlets to portray the Danish immigration system as "inhumane" and its conditions as "unbearable". A recent article in The Nation went so far as to describe the asylum seekers' condition as "social death".

In his piece, New York Univeristy professor Nicholas Mirzoeff described the Sjælsmark detention centre for rejected refugees administered by the Danish Prison and Probation Service as a bleak place with stark living conditions and total lack of humanity. Combined with Denmark's plans to isolate criminal asylum seekers on an island some 80 kilometres from Copenhagen, this sufficed to conjure an image of "institutional xenophobia" in Denmark.

True, over the past decade Denmark has gradually tightened its immigration laws and currently admits fewer refugees compared with its Scandinavian peers. Denmark also has some of the lowest recognition rates among the EU nations. However, according to the Danish NGO Refugees Welcome, Denmark still ranks 46th in refugees per capita worldwide, which is still a far cry from some of the Gulf States or Japan, whose refugee intake is close to none.

However, Denmark's relation with immigrants and refugees may be described as "abused hospitality". As Prime Minister Lars Lokke Rasmussen put it, "there are many who abuse our hospitality, challenge our way of living and put tolerance at risk". In 1983, there were about 60,000 non-Western immigrants in Denmark. By 2018, their number has risen to almost 500,000 in a nation of 5.6 million. Since 2013, Syrians, Afghans, and Eritreans have made up the largest share of asylum seekers in Denmark. This has left a deep mark on the social fabric of Danish society.

"The Experiment That Failed", a book by Mikkel Andersson and Niels Jespersen described Denmark's immigration policy of the past 35 years as "harmful" and immigrants' contribution to society as "mostly negative". According to its authors, non-Western immigrants cost the Danish state coffers a whopping DKK 30 billion ($4.5 billion) per year, while leaving Denmark "poorer, less secure and more polarised".

There is also a huge achievement gap between immigrants and ethnic Danes. Since the 1990s onwards, Denmark has been found to have some of the greatest gaps between immigrant and native-born employment among the OECD countries. While the younger immigrant population are sometimes referred to as a remedy for Denmark's demographic troubles and ageing population, this issue remains hotly contested due to immigrants' low employment rate and modest contribution to the pension fund. According to a 2012 evaluation by PISA Copenhagen, half of immigrant boys left primary education "functionally illiterate".

Immigrants are also over-represented in crime. According to a 2016 report by Statistics Denmark, non-Western male migrants had a crime rate about three times as high as that of the general male population in Denmark. In 2012, Somali citizens residing in Denmark had a ten times higher conviction rate compared with Danish citizens (114.4 per 1,000), meaning that 1 in 10 Somalis residing in Denmark had convictions.

Immigrants' habit of residing in compact areas has resulted in 29 vulnerable areas marked by crime, social problems, low income, and unemployment. These qualify for the official "ghetto list" maintained by the Danish Ministry of Transport, Building and Housing. To alleviate the ghetto problem, a program titled "One Denmark Without Parallel Societies — No Ghettos by 2030", which includes the demolition of existing neighbourhoods, education quotas, and elevated penalties from crimes committed by residents of "ghetto areas".

As a nation that takes pride in its high standards of living and democracy, Denmark remains committed to assuring refugees' rights. Asylum seekers' living expenses are covered by the Danish Immigration Service, which provides numerous forms of cash allowances, food, necessary healthcare and social services, as well as accommodation and transport. However, failure to abide by the written contract with an asylum centre may result in allowances being reduced or revoked.

Despite Denmark's tightened immigration policy, the country ranked eighth in the US News' rating called Best countries for immigrants, sandwiched between Norway and the Netherlands, surpassing Finland, France, and the UK.