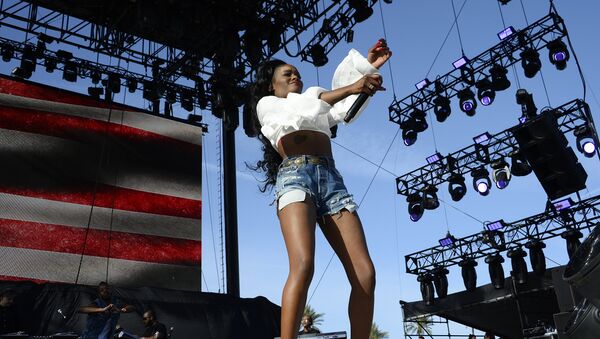 The renowned rapper previously chastised the Irish airline, Aer Lingus, on her Instagram after she decided to get off a Dublin-bound flight following a row with a flight attendant.

During her big sold-out show in Dublin, Azealia Banks made a reference to her earlier remark, targeting an Aer Lingus flight attendant, whom she bashed as a “f*cking ugly Irish b*tch”, and went even further, branding all Irish women “f*cking ugly” after an incident on the plane.

“I want to dedicate this to all the beautiful Irish women that are here”, the outspoken rap artist said as the crowd went wild, The Irish Times reported.

US Rapper Azealia Banks Slams Israel for Racism, Vows to Never Set Foot There
The 212 singer earlier went on a full-blown rant against one of the flight attendants after removing herself from a plane that was supposed to take her to Dublin.

The musician recorded an expletive-laden Instagram story, claiming that she was treated like a “wild animal” on an Aer Lingus flight from London’s Gatwick Airport to Dublin.

According to the tearful rap star, the crew member asked her some questions, and when she failed to answer them the attendant “went a couple of seats over and was just, like, staring at me”.

“And I’m like ‘Girl, don’t stare at me. I didn’t fill out, like, your Aer Lingus work application’. She goes up to the captain of the plane and lies and says that I said ‘Don’t stare at me, I’ll sort you out’. I’m like what are you f*cking talking about? I’m from New York City, I don’t even say sh*t like that. They all just crowd around me and, like, chastise, like I’m some kind of f*cking wild animal”, she said.

Azealia Banks clearly loves her Irish fans. I wonder how many “haggard” and “ugly ass” women will be in @academydublin to see her? pic.twitter.com/p8lk65oX0a

The airline issued a statement, confirming that two guests scheduled to fly from Gatwick to Dublin got off the plane prior to departure:

“The guests in question got off the plane safely of their own accord. Aer Lingus has a strict no-tolerance policy towards disruptive guest behaviour. The safety and security of our guests and crew remains our first priority”, the statement read.

Banks, who was banned from flying with the airline again, said that she was considering lodging a complaint against the company, calling the incident “evil and wicked”.