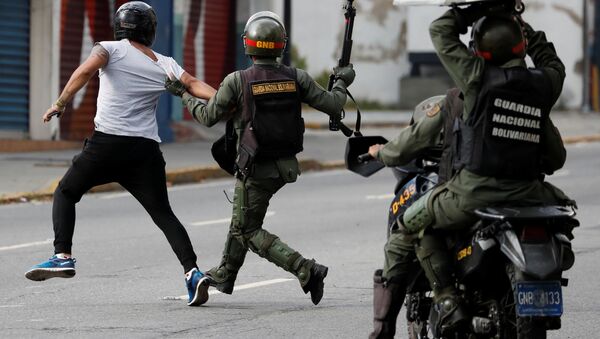 Following news that Venezuela's opposition leader, Juan Guaido, had declared himself interim president Wednesday, the US rushed to endorse him as the legitimate leader, and others mulled following suit. Violence has broken out across Venezuela as anti-government protesters skirmish with police and crowds in favor of President Nicolas Maduro.

The move followed a declaration by Venezuela's National Assembly earlier this week that Maduro, whose second term as president began on January 19 following elections last May, had usurped power. The legislature has been disempowered since the Constituent Assembly was formed in the summer of 2017 to redraft the country's constitution, and the National Assembly, controlled by Maduro's adversaries, rejected the Constituent Assembly's legal superiority.

Large protests, both for and against the Maduro government, have taken over streets across the country, and pro-opposition protests in particular have exchanged violent acts with the police and national guard, who have responded with tear gas and buckshot.

Four have already died in protests leading up to the declaration, and two more are reported dead in Wednesday's exchanges.

In the capital city of Caracas, protesters blocked a highway and attempted to occupy Madariaga Square and were dispersed with non-lethal weapons by the national guard.

#Update: Military is shooting Warning shots fired at protestors at the Highway in #Caracas in #Venezuela. pic.twitter.com/TcxUz0HYTe

​Footage shows tear gas canisters being rolled into a crowd and at least one protester being arrested.

​Protesters appeared in masks in Caracas' El Paraíso neighborhood and threw tear gas back at the police.

​In the city of Maturin, the capital of Monagas state, protesters attacked and burned the local headquarters of the United Socialist Party of Venezuela (PSUV), Maduro's party.

​However, not all are in the streets protesting against the government. Large parades are also demonstrating in favor of Maduro and celebrating his legacy as the heir of his predecessor Hugo Chavez's Bolivarian movement.

​Guaido, the US and its allies have derided the 2018 elections as rigged, but two thirds of the 9.3 million votes cast were for Maduro, the PSUV's candidate.

​"We continue to hold the illegitimate Maduro regime directly responsible for any threats it may pose to the safety of the Venezuelan people," US President Donald Trump said Wednesday. He later added, "We're not considering anything, but all options are on the table."