Get in Line! Another UFC Fighter Wants Rematch With Khabib 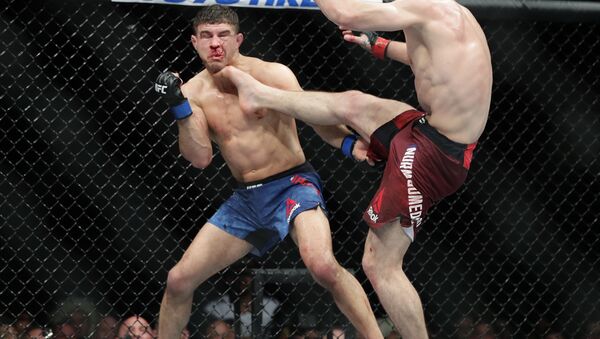 American MMA fighter Alexander "Al" Jay Iaquinta has told MMAJunkie about his plans to reclaim the lightweight champion title from Khabib Nurmagomedov. Iaquinta said that he is ready to fight "anybody ranked above me", be it Tony Ferguson, Dustin Poirier or Conor McGregor, opening the door for a rematch with the Russian athlete to claim the belt.

Al Iaquinta, who fought Khabib in April 2018 and lost, believes that next time the bout will go differently.

"Rematch with Khabib […] is something I want to do this year and have a full training camp, really be prepared. I know that's a fight that, it would be a lot different the second time around", he said.

Iaquinta thinks he should fight McGregor on his way to the champion title, noting that he is not interested in doing it for the money, but for "legacy and ambition". The Irishman also wants a rematch with Khabib after losing a bout with him in October 2018 by submission; but Iaquinta has rejected The Notorious' ambition as "money talks" and said that nothing McGregor did in his fight guaranteed that he would get his much-desired rematch.

However, both McGregor and Khabib might be unavailable for a fight with Iaquinta. The two athletes became embroiled in a post-bout melee and now face the possibility of being punished by the Nevada State Athletic Commission, which could include a temporary or permanent suspension.