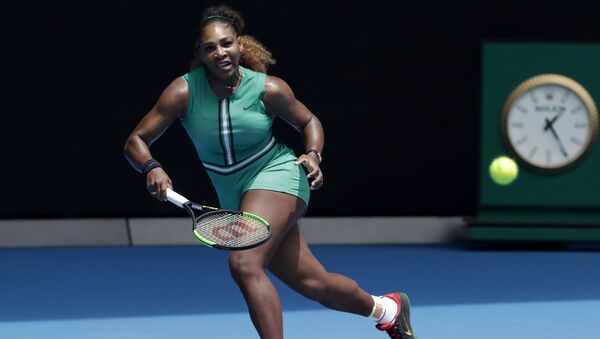 The world is closely watching the US tennis star’s comeback at the Australian Open after giving birth, not only paying attention to her sporting victories. After Serena Williams sent shockwaves online with her onesie suit, she also tickled netizens with a seemingly foreshadowing mistake before beating current WTA number one Simona Halep.

Serena Williams seemingly became confused after she walked onto the court following the announcement of the WTA number one instead of Romanian Simona Halep, who currently holds the rank. The US athlete, who has topped the international rating of tennis players numerous times during her career, swiftly turned around and disappeared under the stands, letting Halep greet the crowd in the stadium first. The blunder, along with Serena’s priceless reaction, was caught on video and posted online to the delight of tennis fans and netizens.

​Some suspected that it was nothing but a Freudian slip for Williams, who is used to being ranked on top, but has had to fight her way back up after the long break that she due to her baby.

Quite the blooper at the Aussie Open. Serena Williams walks out to announcement “world number one”.. hears it and turns around walks back up tunnel 😂

​Her fans insisted that the current ranking doesn’t matter when talking about Serena.

She’s The Greatest to ever play Women’s Tennis Just not Ranked No.1 Now But it doesn’t matter She doesn’t have anything more to prove

It really doesn’t matter she is SERENA WILLIAMS #oneofakind

​Some pointed out that the mishap was prophetic, as Williams eventually beat Halep and eliminated her from the battle for the Grand Slam title.

I’m liking Simona a little more each year. She laughed it off with such class. Her pressers are great, too.

​Others seemed to be more down-to-earth, insisting that it was the tournament’s organisers who had made a mistake when announcing the players and accidentally misled Williams.

She was the lower ranked player, she was supposed to walk out first, the tournament changed the order of introduction. She had it right, they had it wrong.